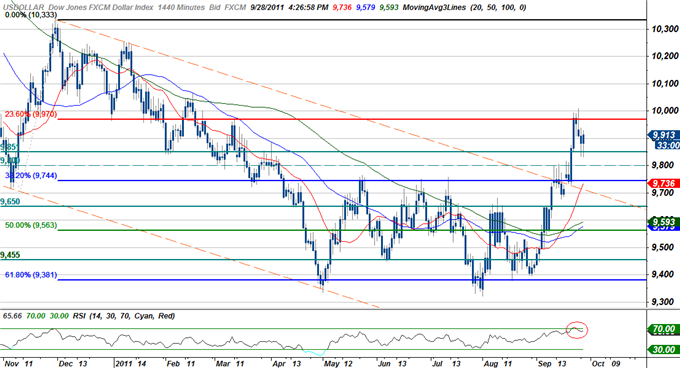 The greenback was markedly higher at the close of North American trade with the Dow Jones FXCM Dollar Index (Ticker: USDollar) advancing 0.42% on the session. The gains come on the back of substantial losses in the equity markets which closed at session lows after a sharp late day sell-off compounded the day’s decline. The Dow, the S&P, and the NASDAQ closed the session off by 1.61%, 2.07%, and 2.17% respectively. Better than expected prints on August durable goods orders were overlooked as concerns over global growth and the lack of developments with regards to the European debt crisis weighed on sentiment, snapping a three day rally.

As noted in yesterday’s USD Trading report, the rally in risk sparked by news that European officials were developing a concrete special purpose vehicle to aid banks holding distressed sovereign debt quickly fizzled as focus shifted back on the macro picture. The dollar saw a strong rebound off of the 9850 support level as expected as risk currencies sold off. Key topside resistance holds at the 23.6% long-term Fibonacci extension taken from the June 8th and December 1st 2010 crests at 9970. A break above this level sees a test of the psychological 10,000 barrier. 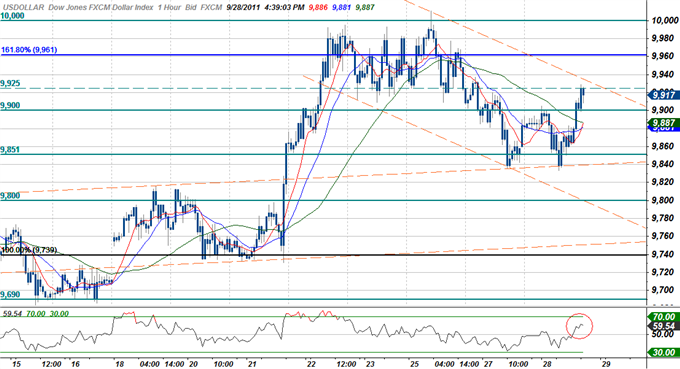 A closer look at the index sees the dollar holding within a descending channel dating back to the 22nd. Interim resistance stands at the convergence of the upper-bound trendline and the 9925 resistance level. A likely breach here sees targets at the 161.8% Fibonacci extension taken from the August 1st and 17th troughs at 9960, backed by the 10,000 level. Interim support now rests at 9900 with subsequent floors eyed at 9850 and 9800. As cited yesterday, relative strength held above oversold territory before breaking above the 50 level in early US trade. A move into oversold territory further supports the case for dollar subsequent dollar advances.

The greenback advanced against three of the four component currencies highlighted by a 1.21% advance against the Australian dollar. Risk currencies like the aussie, the kiwi, and the loonie were especially hard hit today as the late day panic sell-off took its toll. The Japanese yen remained the top performer against the greenback, advancing 0.34% as demand for safety picked up. The dollar is likely to remain well supported at these levels with a test of the seven-month highs above 10,000 possible as market sentiment deteriorates.

Tomorrow’s economic docket is highlighted by the final read on the 2Q annualized GDP, personal consumption, and pending home sales. Consensus estimates call for GDP to print at 1.2%, up from a previous read of 1.0%. Risk on this specific print is heavily weighted to the downside, with a sub 1% read likely to fuel a sharp sell-off in risk assets. Personal consumption figures are released at the same time with estimates calling for a hold at 0.4% for the second quarter. Pending home sales steals the spotlight later in the day with sales expected to show further weakness with a print of -2.0% m/m, down from a previous read of -1.3% m/m. The year on year data is expected to support the argument for ongoing weakness in the housing sector with a read of 6.4% y/y, down from 10.1% y/y. With the euphoria of a possible European solution now behind us, the data has the capacity to weigh even further on sentiment as market participants shift their focus back onto domestic matters and global growth prospects.