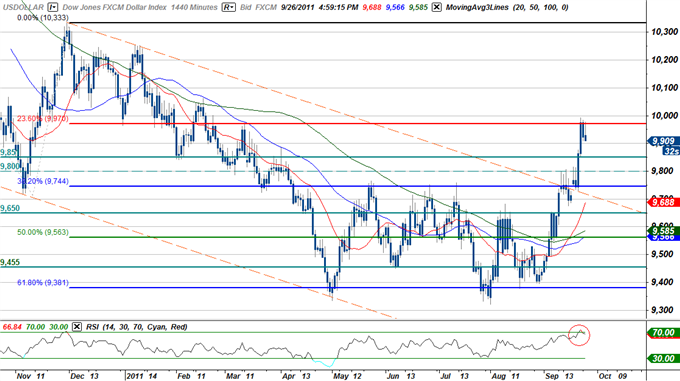 The greenback went on the defensive today in North American trade with the Dow Jones FXCM Dollar Index (Ticker: USDollar) falling 0.29% on the session. The losses come on the back of a strong performance in US equities that saw the Dow, the S&P, and the NASDAQ surge 2.53%, 2.33%, and 1.35% respectively. News that European officials were working on a detailed structural plan to prevent further debt contagion in the region boosted risk appetite as traders went back on the hunt for yields at the expense of the greenback. The plan aims to create a special purpose vehicle whereby banks will be able to sell distressed sovereign debt for bonds which can be used access liquidity from the ECB. The operation resembles that of the Troubled Asset Relief Program (TARP) which was implemented to combat distressed mortgages during the financial crisis.

Although this type of rhetoric has been cited before by European officials, the details suggest that there is a credible plan in the works to alleviate the threat of default which has cast a shadow on the region for well over a year and a half now. The dollar pared some of the recent gains attained last week when markets were seemingly pricing in an imminent default amid heightened risk aversion flows. However as the cliché says, ‘the devil is in the details’ and although the news was well received, it remains to be seen whether officials will be able to enact such an instrument.

The dollar rebounded off topside resistance at the 23.6% long-term Fibonacci extension taken from the June 8th and December 1st 2010 crests at 9970. A break above this level sees a test of the psychological 10,000 barrier. As cited in Thursday’s USD Trading report, daily relative strength suggests that a short-term correction may underway here with interim support eyed at 9900. 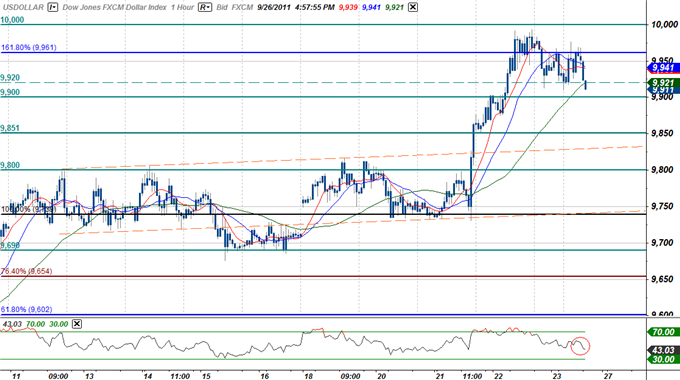 A closer look at the index sees the dollar holding below interim resistance at the 161.8% Fibonacci extension taken from the August 1st and 17th troughs at 9960. Topside resistance holds here with subsequent ceilings eyed at the psychological 10000 level backed closely, by 10040. A break below 9900 sees subsequent floors at 9850, at former trendline resistance currently at 9830, and 9800. `

The greenback fell against all four component currencies, highlighted by a 0.72% decline against the sterling. As noted in today’s Winners/Losers report, the sterling continued to rally off fresh 2011 lows throughout the session as European debt concerns eased. However the rally may be short lived as the GBP/USD approaches strong resistance above the 1.56-figure. The euro saw the smallest gains of the lot, advancing just 0.14% amid a choppy session. The gains were fueled by speculation that officials may be able to devise a short-term solution to avert further debt contagion to the periphery nations.

Tomorrow’s economic docket is highlighted by the September consumer confidence report where consensus estimates call for a print of 46.5, up from a previous 2 year low of 44.5. A weaker than expected print may shift the focus back on the domestic outlook, with traders eyeing durable goods orders, GDP, and personal income/spending data later in the week.