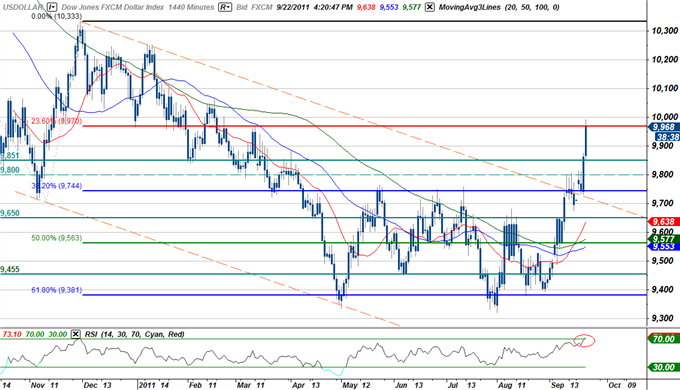 The greenback surged today in North American trade with the Dow Jones FXCM Dollar Index (Ticker: USDollar) advancing 1.07% on the session. The move marks the second consecutive day the dollar has advanced more than 1% and attests to the massive risk sell-off that swept across the globe. US equity markets plummeted early in the session after disappointing Chinese and Euro zone PMI data fueled global growth concerns that were stoked yesterday when the Fed cited “significant downside risks” to the economy. All three major indices were down more than 4% before a late day rally saw the Dow, the S&P, and the NASDAQ close lower by 3.51%, 3.19%, and 3.25% respectively. Treasury yields also came under pressure as investors sought refuge with the 30year dipping below 2.8% for the first time since January 2009.

The dollar closed just below topside resistance at the 23.6% long-term Fibonacci extension taken from the June 8th and December 1st 2010 crests at 9970. A break above this level sees a test of the psychological 10000 barrier. Daily relative strength suggests the move may be over extended here and a short-term correction may be in the cards in the days ahead. 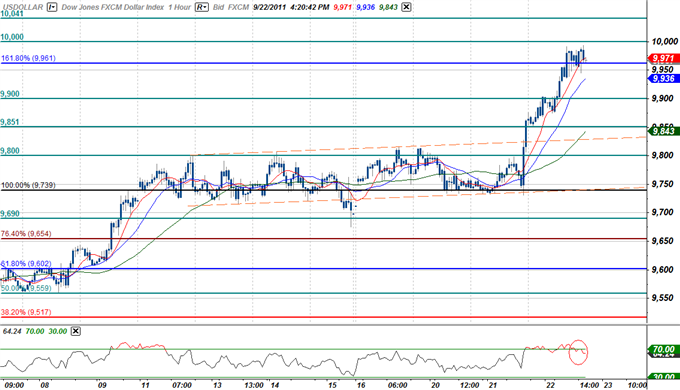 The index broke above interim resistance at 9900 before finding solace just above the 161.8% Fibonacci extension taken from the August 1st and 17th troughs at 9960. Topside resistance now stands at the psychological 10000 level backed closely, by 10040. A break below 9960 sees subsequent floors at 9900, 9850, and former trendline resistance currently at 9830.

The greenback advanced against three of the four component currencies, highlighted by a 2.82% advance against the aussie which moved a staggering 234% of its daily average true range. The dollar has advanced more than 5.8% against this week as investors continue to jettison higher yielding currencies on global growth concerns and fears of a possible double dip recession in the world’s largest economy. The sterling the euro also suffered at the hands of haven flows, closing lower by 0.93% and 0.74% respectively. The yen remains the only currency among the majors to best the dollar, advancing a modest 0.17% by the close of trade in New York. Although investors continue to view the yen as a haven store of value, the advance remains modest as traders remain reluctant test the BoJ’s resolve by taking the USD/JPY pair to record lows.

With no data out of the US on tomorrow’s economic docket, dollar price action will hinge on broader market sentiment with investors likely to reduce risk holdings head of the G20 and IMF annual meetings over the weekend. Accordinlgly, the dollar should remain well supported at these levels and is expected to continue to consolidate within its current range noting that another bout of risk aversion flows would undoubtedly support the reserve currency.