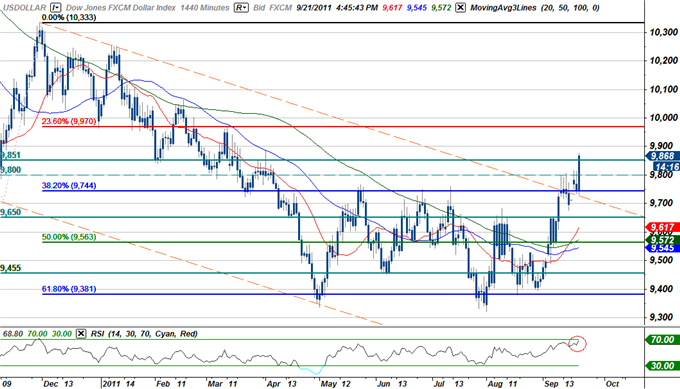 The greenback was significantly higher at the close of North American trade with the Dow Jones FXCM Dollar Index (Ticker: USDollar) advancing 1.08% on the session. The highly anticipated FOMC rate decisionfueled volatility late in the day after the central bank revealed plans to buy $400 billion of long-term debt in an operation dubbed my market participants as ‘operation twist.’ The move aims to combat “significant downside risks” to the economy while not increasing the size of the Fed’s balance sheet. To offset the cost, the bank will sell $400 billion in short-term treasuries and looks to flatten the yield curve by lowering interest rates on longer term maturities.

The move was not enough to calm nervous investors who focused on the Fed’s downward revision of the economic outlook. Stocks plummeted on the release with the Dow, the S&P, and the NASDAQ plunging 2.49%, 2.94%, and 2.01% respectively. Traders and investors alike flocked into the safety of the greenback which surged against all its major counterparts on relief that the central bank would not be implementing further dollar diluting measures to shore up the economy.

The dollar broke above the psychological 9800 barrier noted in yesterday's USD Trading Today report before extending its advance past the 9850 resistance level. Subsequent ceilings now stand at 9900 and the 23.6% Fibonacci extension takenfrom the June 8th and December 1st 2010 crests at 9970. The dollar is likely to remain well supported here as growing concerns about global growth begin to take root. 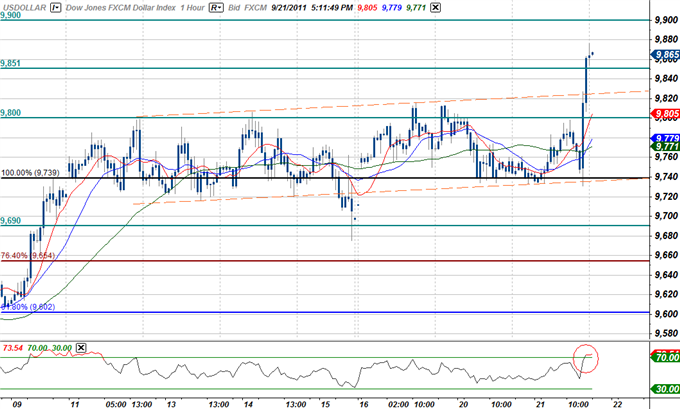 A closer time frame shows the index breaking above trendline resistance of the ascending channel dating back to September 11th after the FOMC release. Interim support now rests with former trendline resistance backed by 9800 and the 100% Fibonacci extension taken from the August 1st and 18th troughs at 9740. A breach above 9900 eyes targets at the 161.8% Fibonacci extension at 9960 backed closely by 9970.

The greenback bested all four component currencies highlighted by a staggering 2% advance against the aussie. With concerns now focused back on growth prospects for the world’s largest economy investors jettisoned risk across asset classes in favor of lower yielding “safer” assets, with the dollar and the yen the chief beneficiary of these haven flows. As traders continue to digest the implications of the Fed’s announcement today, it’s likely that risk appetite will remain subdued for sometime as markets were expecting a more substantial move by the central bank to help support the faltering recovery.

Tomorrow’s economic docket sees initial jobless claims at 1230GMT followed by leading indicators and the house price index at 1400GMT. Consensus estimates call for claims to fall by just 8k to 420K last week. August leading indicators are expected to decline with estimates calling for a print of just 0.1%, down from a previous read of 0.5%. The July house price index is also expected to show further weakness with expectations for a print of 0.2% from a read of 0.9% a month earlier. The data has the capacity to exacerbate weakness in the risk trade, with the greenback standing to benefit as investors continue to deleverage on concerns of a possible dip back into recession.