Investors Brace for Bernanke- Dollar Index Drifts Ahead of FOMC 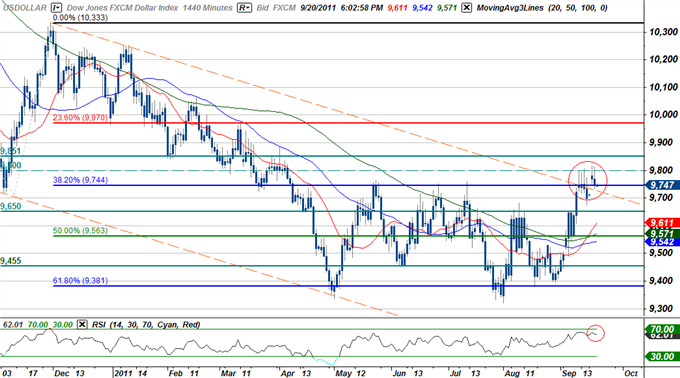 The greenback was marginally higher at the close of North America trade with the Dow Jones FXCM Dollar Index (Ticker: USDollar) advancing 0.13% on the session. The move comes on the back of an extremely volatile day in equities that saw a late-day sell-off erase substantial gains in the major indices. The Dow was able to stay afloat with a fractional gain of just 0.07% while the S&P and the NASADAQ closed lower by 0.17% and 0.86% respectively. Word that officials from the so called troika (European Union, ECB, and IMF) plan on returning to Athens in early October to complete their assessment of the Greek economy slammed risk sentiment as concerns mounted that the debt crisis may remain a topic of contention until next month.

With the uncertainty in Europe far from over and growth expectations dwindling, traders will be laser focused on tomorrow’s Fed interest rate decision where investors expect Chairman Bernanke and company to lay out steps to shore up the fragile economy. And while it’s unlikely that the Fed will announce QE3, the central bank may see scope to increase holdings of longer-term maturities in an attempt to flatten the yield curve. Another option the Fed may consider is reducing the interest paid on reserves which would essentially force institutions to increase lending. If officials do decide to increase the size of the Fed’s balance sheet through additional asset purchases, look for the dollar to come under considerable pressure as these measures are primarily dollar diluting policies.

The dollar failed to break above the psychological 9800 resistance level, closing just above the key 38.2% Fibonacci extension taken from the June 8th and December 1st 2010 crests at 9745. Topside barriers remain unchanged at the 9800 mark, with a breach likely to see extended gains for the greenback. Future dollar price action hinges on the Fed, with market participants eagerly awaiting the FOMC rate decision tomorrow. 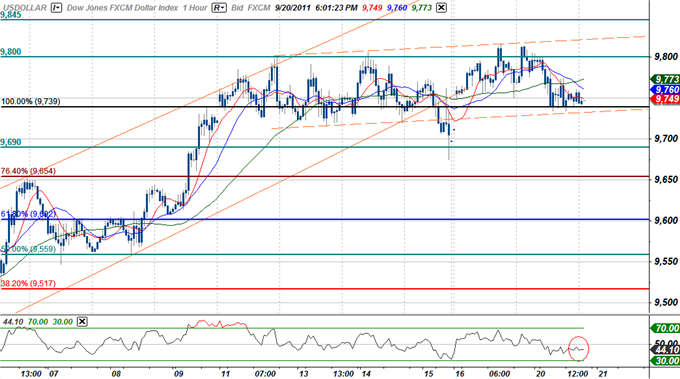 The greenback fell against all four component currencies highlighted by a 0.53% decline against the aussie. Minutes from the RBA overnight surprised investors with a less dovish than expected tone after Governor Glenn Stevens cited that diminishing interest rate expiations were overdone and that the “current setting of monetary policy left the board well placed to response to evolving global and domestic economic conditions.” The Aussie moved a full 113.36% of its daily average true range before settling just below interim resistance at 1.0280 in New York.

Tomorrow’s economic docket sees existing home sales at 1400GMT. Consensus estimates call for a print of 4.75M sales in August, up from 4.67M, with the month on month advance expected to print at 1.7%, up from a previous contraction of 3.5% m/m. The FOMC will take the limelight for the rest of the session with investors eagerly anticipating the Fed’s accompanying policy statement for insight into the central bank’s policy outlook and whether another round of quantitative easing is in the cards.