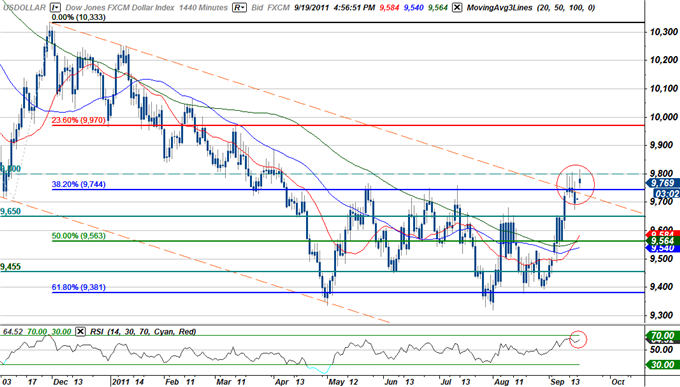 The greenback was stronger at the close of North America trade with the Dow Jones FXCM Dollar Index (Ticker: USDollar) advancing 0.63% on the session. The rally comes on the back of a steep sell-off in US equities which saw the Dow, the S&P, and the NASDAQ off by 0.94%, 0.98%, and 0.36% respectively at the close of trade. The indices closed well off their lows however after reports hit wires that talks were in the works to prevent a Greek default. And while this type of rhetoric is common, it was enough to pull markets back from the sharp declines seen earlier in the session.

The dollar broke above the convergence of long-term upper-bound trendline resistance and the key 38.2% Fibonacci extension taken from the June 8th and December 1st 2010 crests at 9745. Topside barriers now rest at the psychological 9800 mark, with a breach likely to see extended gains for the greenback. Much of the advance hinges on the Fed however, with market participants eagerly awaiting the FOMC rate decisionon Wednesday. And while there’s is no chance the central bank will move on rates, traders will be lending a keen ear to remarks from Chairman Ben Bernanke for insight into the Fed’s policy outlook and whether another round of quantitative easing in the cards. Although a ‘QE3’ is unlikely in its current form, investors do expect the central bank to outline other measures that may be implemented to support the fragile recovery. 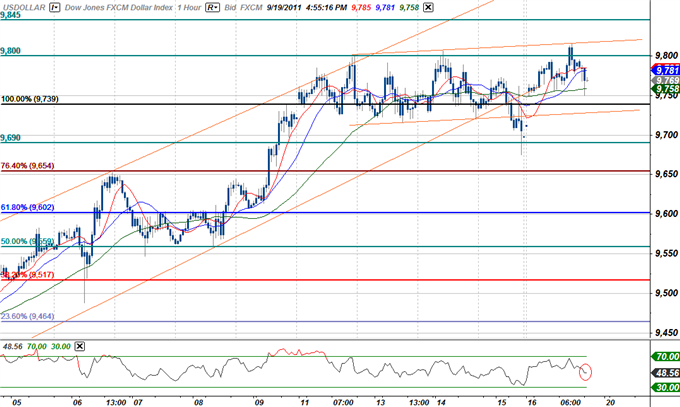 The greenback advanced against three of the four component currencies highlighted by a 1.37% advance against the aussie. As one would expect, the aussie suffered the largest losses on the back of today’s heightened risk aversion flows as investors shed risk in favor of lower yielding “safe” assets like the dollar and the yen. Traders will be eagerly awaiting RBA minutes overnight as interest rate expectations continue to plummet. Unless Governor Glenn Stevens cites increasingly hawkish remarks, the aussie is likely to remain under pressure.

Tomorrow’s economic docket is rather quiet in the US with the August housing starts and building permits representing the only event risk on the US calendar. Consensus estimates call for house starts to contract further with a print of -2.3% from a previous read if -1.5%. Permits are seen improving slightly with an expected print of -1.8%, down from a steeper loss of 3.2% a month earlier. Although a late day rally in stocks pared much of the early losses, markets remain vulnerable to sudden swings in sentiment with the greenback standing to benefit most from accelerated risk-off flows.