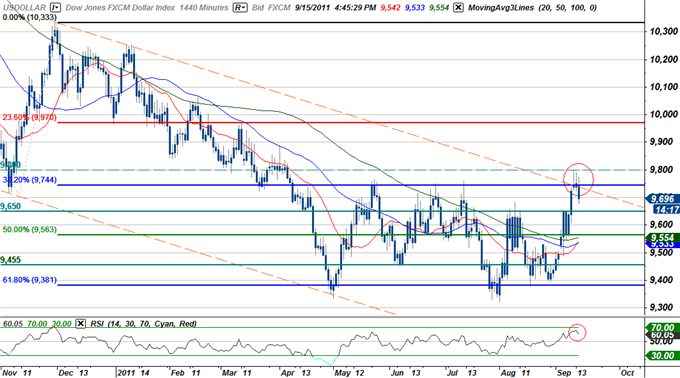 The greenback was markedly lower at the close of North American trade with the Dow Jones FXCM Dollar Index (Ticker: USDollar) off 0.43%, moving more than 123% of its daily average true range. The decline comes on the back of yet another strong performance in US equities that saw the Dow, the S&P, and the NASDAQ close higher by 1.66%, 1.72%, and 1.34% respectively. News that the ECB has coordinated with central banks around the world to provide liquidity to financial markets extended the morning rally as concerns of an imminent default eased. Among the participating nations are the Bank of England, the Federal Reserve, the Bank of Japan, and the Swiss National Bank. The move does little in the way of a long term solution for the Europeans however, and the debt crisis remains the central focus for investors.

The dollar failed to close above the convergence of long-term upper-bound trendline resistance and the key 38.2% Fibonacci extension taken from the June 8th and December 1st 2010 crests at 9745. A close above this level remains paramount for further topside advances in the index. Daily relative strength continues to hover just below overbought levels, with a break above the 70-mark likely to fuel accelerated gains for the index. It’s worth noting that the slope steepened today in US trade, suggesting the greenback may yet see further losses. However as markets digest the longer term implications of today’s announcement, the dollar may continue to consolidate at these levels before attempting a topside breach. 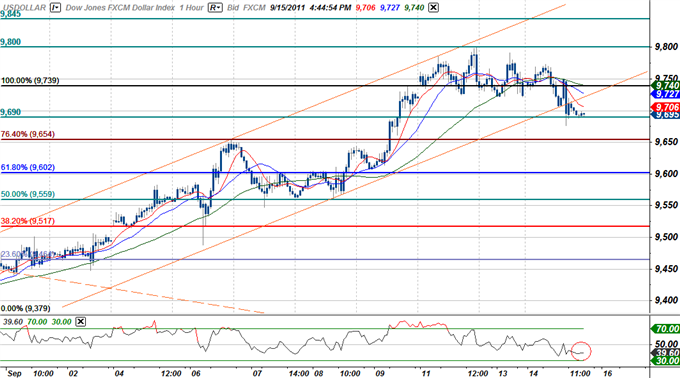 The index eased away from the 100%Fibonacci extension taken from the August 1st and 18th troughs at 9740 before finding solace at the 9690 support level.Hourly relative strength holds above just above the 40-mark, a level it has been unable to break below since late August. If RSI dips below this support level, the dollar is likely to see further losses with a break here eying subsequent floors at the 76.4% extension at 9650 and the 61.8% extension at 9600. Topside resistance now holds at 9740 with a breach eyeing topside targets at 9800 and 9845.

The greenback fell against three of the four component currencies highlighted by 0.91% decline against the euro which surged early in the session on news that central banks were coordinating to ensure ample liquidity to the financial sector. The EUR/USD pair broke above trendline resistance of the ascending channel which held the pair since September 11th. The Australian dollar posted a modest gain of 0.44% as easing debt concerns saw a reprieve from the heavy selling of the high yielder. The yen was the weakest performer against the dollar, sliding 0.02% as investors jettisoned haven assets in search of yields. Moving forward the greenback will remain vulnerable so long as risk sentiment remains well supported.

Tomorrow’s economic docket is rather quiet in the US with the University of Michigan presenting the only event risk on the US calendar. Consensus estimates call for a print of 56.9, up from a multi-year low of 55.7 a month earlier. Investors will be closely eying the data after today’s weaker than expected prints on jobless claims and the Philadelphia Fed business outlook survey. Despite the recent rally seen, markets remain vulnerable to swings in sentiment with the greenback the most likely beneficiary of risk-off flows.