US Dollar Holds Below Key Fibonacci Resistance- Rally at Risk 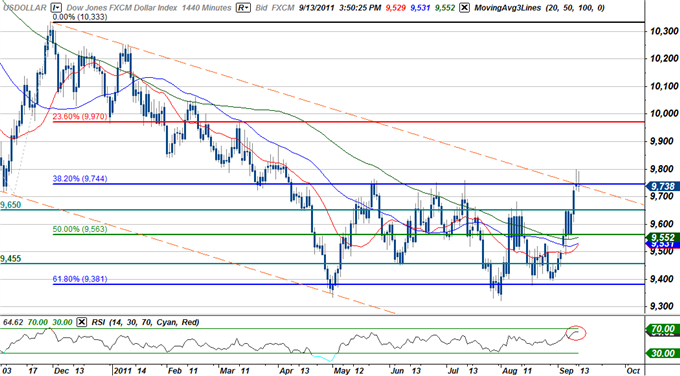 The greenback was relatively unchanged at the close of North American trade with the Dow Jones FXCM Dollar Index (Ticker: USDollar) off just 0.02% despite moving more than 93% of its daily average true range. A choppy US session saw equities close higher across the board with the Dow, the S&P, and the NASDAQ advancing 0.40%, 0.91%, and 1.49% respectively. European equities were even stronger with the major indices surging 1.4-2.5% across the board on optimism that officials will be able to curb the threat of further debt contagion. However the rally in risk may be short lived as more and more investors are beginning to factor in a possible Greek default in the near-term. Subsequently we may see risk appetite dwindle again with the US dollar the primary beneficiary of haven flows in absence of the swissie which remains well supported since the SNB effectively put a floor on the EUR/CHF exchange rate at 1.20.

The dollar closed just below the convergence of long-term upper-bound trendline resistance and the key 38.2% Fibonacci extension taken from the June 8th and December 1st 2010 crests at 9745. A close above this level is likely to see accelerated gains for the greenback and could be triggered by another bout of risk aversion should officials fail to calm market nerves about the ongoing sovereign debt saga that continues to ravage the region. 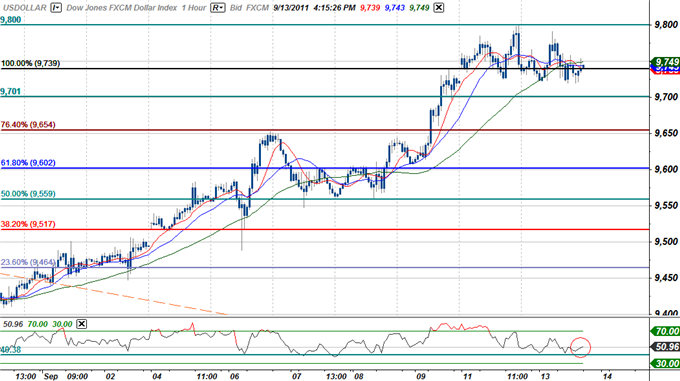 The index continues to straddle the 100% Fibonacci extension taken from the August 1st and 18th troughs at 9740 after tagging the psychological 9800 level in pre-market trade. Again we highlight that a close above 9745 remains crucial for further dollar advances with a breach eyeing topside targets eyed at 9845 and 9900. Interim support rests at 9700 backed by the 76.4% extension at 9650 and the 61.8% extension at 9600.

The greenback fell against all two of the four component currencies, highlighted by a 0.43% decline against the Japanese yen which remained well supported on account of nervous investors seeking refuge from the European crisis. As noted in today’s Winners / Losers report, the sterling remained the worst performer throughout the US session after weaker than expected trade balance figures overnight fueled speculation that the BoE will need to nearly double their asset purchase program to stimulate the ailed economy. The pound remains vulnerable ahead of key employment data overnight where consensus estimates call for jobless claims to ease to 35K from 37.1K in August, with the ILO Unemployment rate seen holding steady at 7.9%.

Tomorrow’s economic docket is highlighted by the August producer prices and advanced retail sales reports. Prices are expected to ease with consensus estimates calling for a year on year print of 6.5%, down from a previous read of 7.2% y/y. Advanced sales are also seen printing lower at 0.2% from a read of 0.5% a month earlier. The day closes with the business inventories report where estimates are expecting to see a rise of 0.5% for the month of July, up from the June print of just 0.3%.