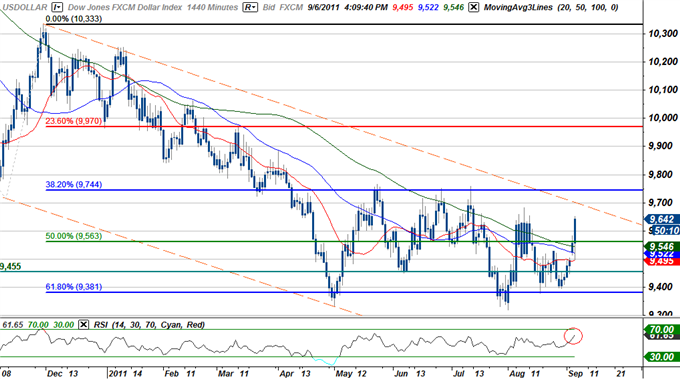 The greenback continued its assault on the majors today after the Swiss National Bank shocked markets by effectively pegging the franc to the euro. The move sparked volatility across all of the majors with the dollar surging as traders sought haven amid continued global economic uncertainty. With the franc no longer a viable option to hedge risk and the BoJ continuing to warn against further yen appreciation, investors have piled into the ‘safety’ of the greenback with the Dow Jones FXCM Dollar Index (Ticker: USDollar) advancing 0.83% on the session. The gains come on the back of a sharp decline in equities which pared gains throughout the day to close well off session lows with the Dow, the S&P, and the NASDAQ off by 0.90%, 0.74%, and 0.26% respectively.

As noted in yesterday’s USD Trading report, the dollar remains well supported after breaking above the 50% long term Fibonacci extension taken from the June 8th and December 1st 2010 crests at 9565. The greenback now looks poised for a test of the upper bound trendline of the descending channel dating back to the November highs at 9700. A steep upward sloping RSI read of 61 sees further topside potential should the dollar breach interim resistance at 9655. 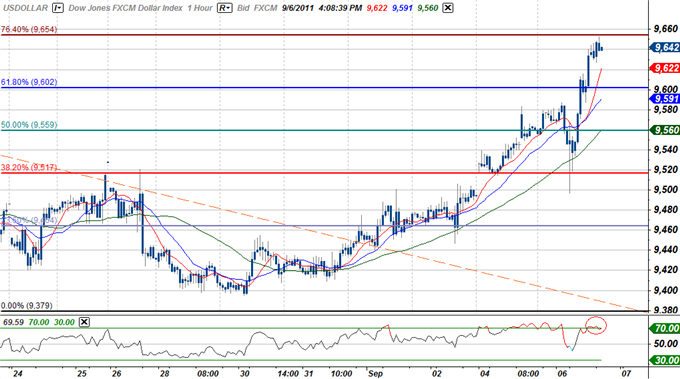 The greenback advanced against all four component currencies for a second consecutive day, highlighted by a 1.05% advance against the sterling which fell after a report showed UK retail sales fell in August. The data fueled speculation that the BoE will need to implement additional easing measures to support the fragile recovery. Interestingly the yen was also on the defensive after the SNB’s bold action saw investors pulling out of the yen on concerns the BoJ would be emboldened by the Swiss bank’s actions. The yen was lower by 1.01% against a stronger dollar at the close of trade in New York.

The euro saw the highest degree of volatility, moving a staggering 196% of its daily average true range before settling lower by 0.68% on the session. Topping the performance chart was the high yielding aussie which fell just 0.36% against the dollar. As noted in today’s scalp report, the Australian dollar has remained rather resilient despite the massive risk sell-off seen over the past few sessions. Although the RBA did leave rates unchanged at 4.75% overnight, Governor Glenn Stevens cited less dovish remarks then expected as he noted the threat of rising inflationary pressures. The aussie was softer by just 0.36% ahead of key 2Q GDP data overnight which is expected to show the economy grew 1.0% q/q, up from a previous contraction of 1.2% q/q.

The US economic docket tomorrow is light with the Fed’s beige book the only piece of data on tap. Investors will be combing the report for an updated on current economic conditions across districts. And with the string of weaker than expected data continuing to suggest the domestic economy may be faltering, the release has the potential to further shift market sentiment.