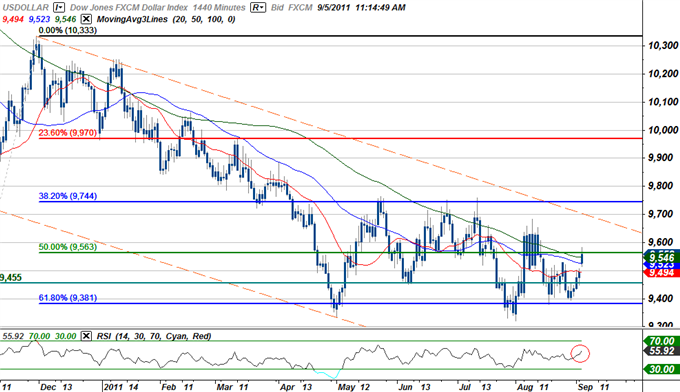 The greenback went on the offensive today as a massive sell-off in risk saw investors scurry into the safety of the dollar after German Chancellor Angela Merkel’s ruling party lost an election in Merkel’s home state over the weekend. The news rekindled concerns that the German support for the European bailouts is dwindling, sending the euro sharply lower in London trade. The Dow Jones FXCM Dollar Index (Ticker: USDollar) surged 0.87% as traders sought haven amid speculation that Europe may lose the support of its largest economy. Government bonds across the region surged with yields on Greek 2-year bonds reaching record highs above 50%. The dollar is likely to remain well supported here after testing the long-term 50% Fibonacci extension taken from the June 8th and December 1st 2010 crests at 9565. 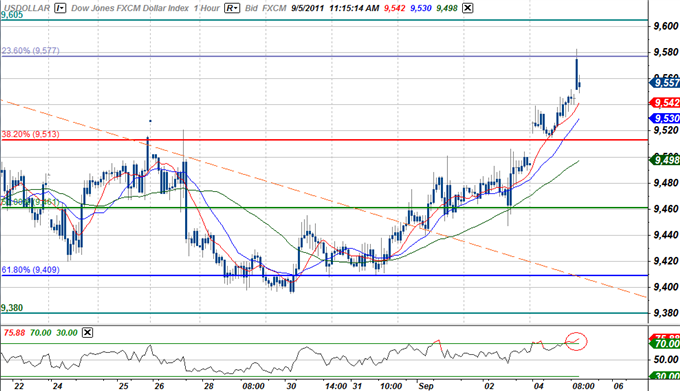 The greenback advanced against all four component currencies, highlighted by a nearly 1.19% advance against the Australian dollar. As investors continue to seek haven amid growing global economic uncertainty, higher yielding currencies like the kiwi and the aussie will remain under pressure as traders move into lower yielding ‘haven’ assets like the dollar, the swissie, and the yen. The euro follows with a loss of nearly 1% against the greenback as support for Angela Merkel’s Christian Democratic Union dwindles. With concerns that the euro zone may lose German support for additional bailouts of the periphery nations, the single currency is likely to remain under pressure as government bond yields across the region surge.

US equity markets are closed today in observance of Labor Day, with the economic docket picking up on tomorrow with August ISM non-manufacturing composite on tap. Consensus estimates call for print of 51.0, down from a previous read of 52.7. An expected print would further fuel concerns that the US may be sliding back into recession in light of the string of weaker than expected prints seen last month. Although haven flows continue to support the greenback in the interim, speculation that the Fed will move forward with some form of easing may weigh on dollar sentiment moving forward. Investors will be eying key central bank rate decisions this week from RBA, BoJ, BcC, BoE, and the ECB. Traders will be gauging the sentiment of central banker for a clearer read on growth outlooks for their respective nations with the dollar likely to respond to these shifts in future prospects for the global economy.