Dollar Climbs on Dismal NFPs as Traders Jettison Risk- Will it Last? 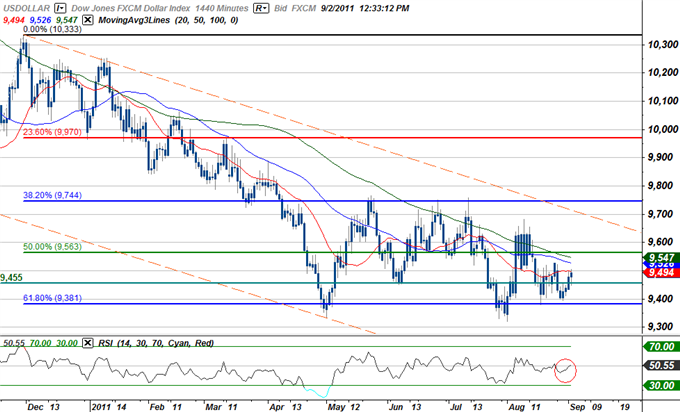 The greenback advanced early in North America trade with the Dow Jones FXCM Dollar Index (Ticker: USDollar) climbing0.32% on the back of a dismal read on the August non-farm payroll report. The dollar remains at risk however as the print increases the probability the Federal Reserve will implement new stimulus measures to support the ailed economy, thereby diluting the value of the reserve currency. Equity markets plummeted on the data with the Dow, S&P, and the NASDAQ down 1.69%, 1.90%, and 1.92% respectively, mid-day in New York. Commodities also came under pressure with crude oil falling nearly 3% on the session while gold remained well supported on risk aversion flows.

The dollar index continues to hold below the 20-day moving average just shy of 9500 after breaking above the 9455 level earlier in the week. But as investors digest the implications of a protracted recovery in the labor markets, the dollar may go back on the defensive. Traders will be lending a keen ear to policy makers next week as a flurry of key economic data out of the developed economies are likely to support the notion of a global growth slowdown. And as these concerns take root, equities are likely to remain under pressure as traders jettison risk. The dollar’s future will largely depend on expectations for further quantitative easing. 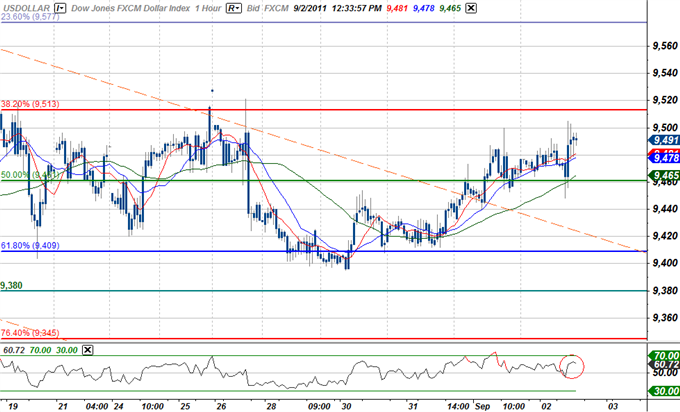 The index broke remains well supported above the 50% Fibonacci extension taken from the July 12th and August 8th crests at 9460. Interim support rests here with subsequent floors seen at the 61.8% extension at 94010 and 9380. Topside targets are held at 9500 backed closely by the 38.2% extension just shy of 9520.

The greenback advanced against two of the four component currencies, highlighted by a 0.56% advance against the Australian dollar. Investors continue to seek refuge in lower yielding “haven” assets in light of today’s disappointing employment data, with risk currencies like the aussie and the kiwi on the defensive. The sterling tops the performance chart at 1pm in New York with a modest advance of 0.15% against the dollar. Although concerns regarding the health of the UK economy have continued to gather pace, the pound seems to be benefitting from have flows diverted away from the franc. Earlier in the session the Swiss government released a statement backing their support of the SNB with regards to implementing measures to stem the rapid appreciation of the swissie. Subsequently the franc pared nearly half the day’s gains reported in today’s Winners/Losers report.

US equity markets will be closed on Monday in observance of Labor Day, with the economic docket picking up on Tuesday with August ISM non-manufacturing composite on tap. Consensus estimates call for print of 51.0, down from a previous read of 52.7. An expected print would further fuel concerns that the US may be sliding back into recession in light of the string of weaker than expected prints seen last month. The fate of the dollar hangs in the balance with recent price action lacking conviction. Although haven flow are likely to support the greenback in the interim, speculation that the Fed will move forward with some form of easing is likely to weigh on dollar sentiment moving forward. Investors will be eying key central bank rate decisions next week from RBA, BoJ, BcC, BoE, and the ECB. Traders will be gauging the sentiment of central banker for a clearer read on growth outlooks for their respective nations with the dollar likely to respond to these shifts in future prospects for the global economy.