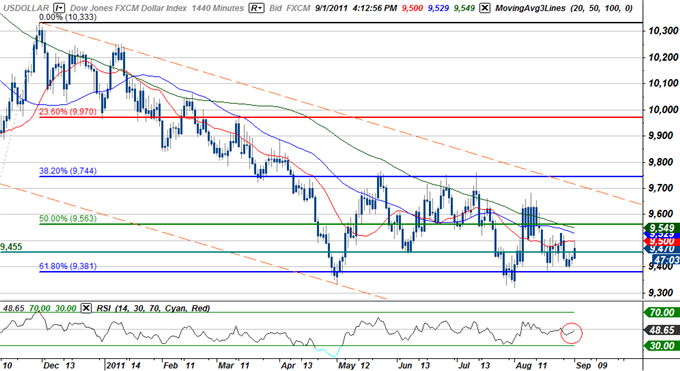 The greenback was higher at the close of North America trade for the third consecutive day with the Dow Jones FXCM Dollar Index (Ticker: USDollar) advancing 0.25% on the session. The advance comes on the back of a sell-off in equities that saw the Dow, the S&P, and the NASDAQ decline 1.03%, 1.19%, and 1.30% respectively. A flurry of weaker than expected economic data continues to weigh on investor sentiment and accordingly the dollar remains well supported on haven flows.

US economic data was weaker across the board today with non-farm productivity, initial jobless claims, and construction spending missing consensus estimates. Although ISM construction data bested calls for a decline to a 2-year low with a print of 50.6, a deeper look at the break down sees employment, exports, and production sliding into a further state of contraction. The dismal release puts further pressure on the Fed to implement new stimulus measures to support the faltering recovery and prevent a slide back into recession.

The dollar broke back above the 9455 level in pre-market trade before tagging the 20-day moving average at 9500 early in the session. As noted in yesterday’s USD Trading report, a hold above the key 61.8% Fibonacci extension taken from the June 7th and November 30th 2010 crests at 9380 remains paramount for the greenback with a break below risking accelerated losses. Subsequently we anticipate a topside break of the 50% Fib extension at 9560 to confirm that an interim bottom has been put in place. 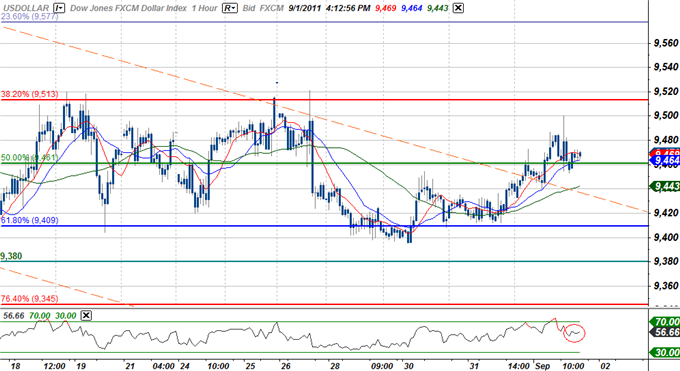 The index broke above trendline resistance of the descending channel formation dating back to August 8th, with the greenback struggling to hold above the 50% Fibonacci extension taken from the July 12th and August 8th crests at 9460. Interim support rests at 9440 with subsequent floors eyed at the 61.8% extension at 94010 and 9380. Topside targets are held at 9500 backed closely by the 38.2% extension just shy of 9520.

The dollar advanced against three of the four component currencies highlighted by at 0.70% advance against the euro which remained the weakest of the lot for a second consecutive day. Interestingly enough, the aussie remained well supported today, posting its longest winning streak since April. The high yielder topped the performance chart yet again despite the day’s risk sell-off after a report showed retail sales grew by 0.5% m/m, besting calls for a print of 0.3% m/m. The data saw interest rate expectations slightly improve with Credit Suisse overnight swaps now factoring in 111basis points in rate cuts for the next twelve months. The figure is an improvement on the 150basis points seen earlier in the week and continues to support the aussie’s recent rally. However tomorrow’s economic docket sees an increased risk that the recent run-up may falter as traders seek refuge in lower yielding “haven” currencies.

Tomorrow investors will be eyeing the highly anticipated non-farm payrolls report ahead of the Fed’s extended 2-day meeting on the 20th of September. With the recent string of disappointing data still fresh in the mind of investors, tomorrow’s NFP print has potential to weigh heavily on growth prospects for the world’s largest economy as the recovery in the labor market remains on shaky ground. Consensus estimates call for a print of 65K jobs, down from a previous read of 117, while the unemployment rate is expected to hold at 9.1%. The fate of the dollar hangs in the balance with heightened risk aversion flows likely to support the greenback should the data disappoint.