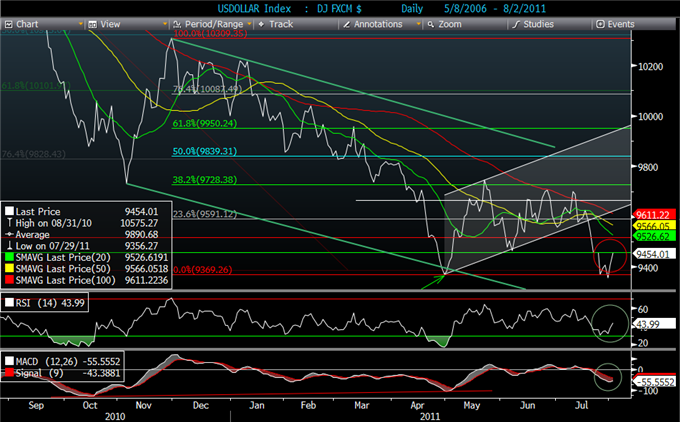 The greenback continued to rally today in North American trade after lawmakers passed a deficit bill that would avert a possible US default. The Dow Jones FXCM Dollar Index (Ticker: USDollar) advanced 0.50% on the session, moving a full 105% of its daily average true range. The gains come on the back of a sharp sell-off in equities that saw the Dow, the S&P 500, and the NASDAQ plummet by 2.19%, 2.56%, and 2.75% respectively. Today’s personal spending figures for the month of June missed estimates with a contraction of .2%, fueling today’s rapid decline as concerns over domestic growth continue to take root. Although the both the House and the Senate passed the much anticipated bill to raise the debt limit, traders continued to sell risk with higher yielding currencies and assets declining across the board. The greenback remains supported as eased concerns regarding a possible default saw traders once again flocking into the safety of the reserve currency. The dollar index continued its advance off the April lows at 9370 before encountering interim resistance just above the 9450 level. 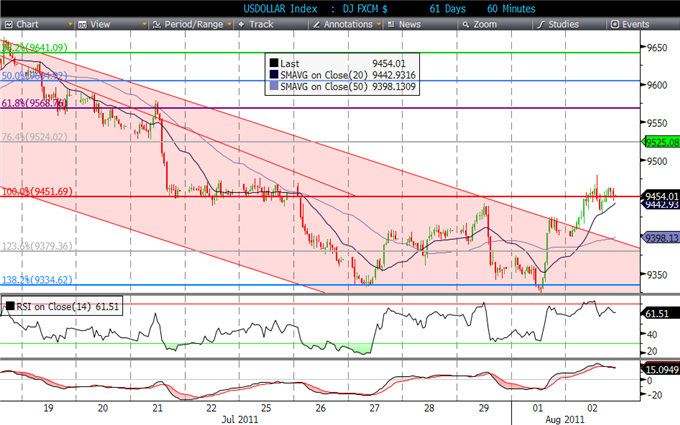 An hourly chart sees the index breaking out of the descending channel dating back to July 12th before finding solace around the 100% Fibonacci extension taken from the May 23rd and July 12th crests at 9450. The dollar continues to straddle this level noting interim resistance at the 76.4% Fib extension at 9525 and the 61.8% extension at 9568. Downside support is eyed at the former upper-bound trendline resistance, now support, backed by the 123.6% extension at 9380 and 9335.

The greenback advanced against two of the four component currencies, highlighted by a 1.63% advance against the Australian dollar. As investors continue to move into lower yielding haven assets, the Aussie will continue to come under pressure. With the highest interest rate of the developed economies, the Aussie saw a broad based sell-off after remarks made by RBA Governor Glenn Stevens saw interest rate expectations deteriorate further. The head of the central bank cited “acute uncertainty” in the financial markets and concerns over the “medium0term outlook for inflation.” Today’s risk-off sentiment coupled with the RBA’s outlook continued to weigh on the aussie throughout North American trade with the AUD/USD pair moving a staggering 180% of its daily ATR. The euro was also on the defensive against the dollar, sliding 0.32% as investors now shift their focus to global growth prospects.

Tomorrow’s economic docket is highlighted by the ADP employment report, the SM non-manufacturing composite, and June factory orders. Traders will be closely eyeing tomorrow’s employment data ahead of Friday’s much anticipated non-farm payroll report where estimates are calling for a gain of 85K jobs last month, up from the dismal print of 18K seen last month. Regardless, the gains in the employment sector will not be enough to reduce the 9.2% unemployment rate, and accordingly a weaker read will continue weigh on future growth prospects for the world’s largest economy.