U.S. Dollar Heavy Ahead of Bernanke- Trend Holds for Now 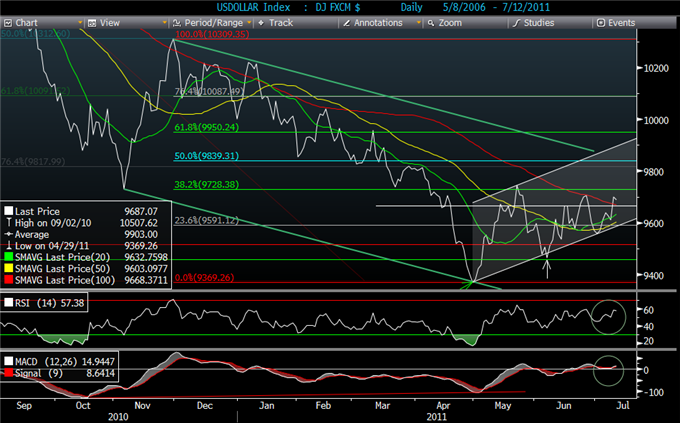 The greenback closed out North American trade on a softer note with the Dow Jones FXCM Dollar Index (Ticker: USDollar) off by 0.12% on the session. News that rating agency Moody’s had downgraded Ireland’s sovereign debt to junk status saw equity markets quickly pare early gains with the Dow, the S&P 500, and the NASDAQ closing lower by 0.47%, 0.44%, and 0.74% respectively. The announcement compounded concerns that the European crisis is deepening with investors once again seeking safety amid ongoing contagion fears. Investors continue to favor the swissie and the yen as an alternative safety play ahead of the August 2nd deadline when the US may default on its debt if consensus to raise the limit is not reached. 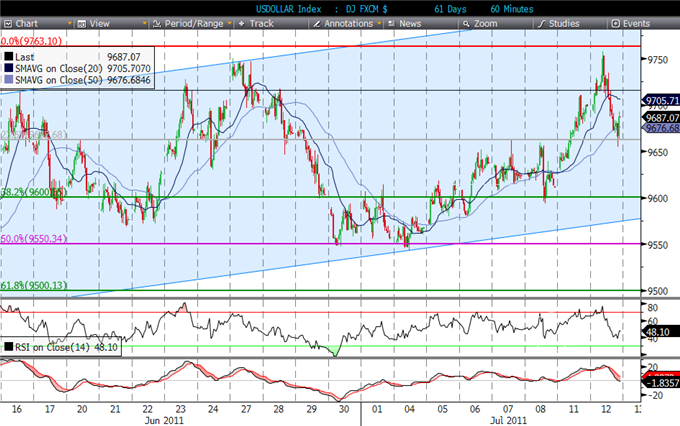 Also weighing on the dollar was a surprisingly dovish FOMC minutes release which revealed dissensions among the voting member as to whether or not additional monetary easing will be needed if economic conditions remain weak. The threat of “QE3” saw the dollar weaken against its major counterparts before finding support at the 23.6% Fibonacci retracement taken from the May ascent at 9660. Subsequent floors are seen at 9600 backed by the lower bound trendline of the ascending channel dating back to early June, currently at 9575. Topside resistance is now eyed at 9715 followed by 9750 and the May 23rd high at 9763.

A look at the component currencies sees a mixed performance highlighted by a 1.27 advance in the yen. The USD/JPY pair moved more than 205% of its daily average true range as traders sought refuge in low-yielding “safe haven” assets. The pair was the topic of yesterday’s scalping report which noted a major break of trendline support. The euro continued to weaken, with the EUR/USD pair sliding late in the day on news of the Moody’s downgrade,

The dollar may remain on the defensive ahead of Fed Chairman Ben Bernanke’s semi-annual monetary policy report. The chairman will testify before the House Financial Services committee on Wednesday and the Senate Banking Committee on Thursday to give his assessment on the outlook for the US economy. With today’s FOMC minutes fueling speculation about the possibility of further stimulus from the Fed, investors will be lending a keen ear to the Bernanke’s remarks and the dollar may see increased volatility in response as another round of quantitative easing would surely see the greenback lower.