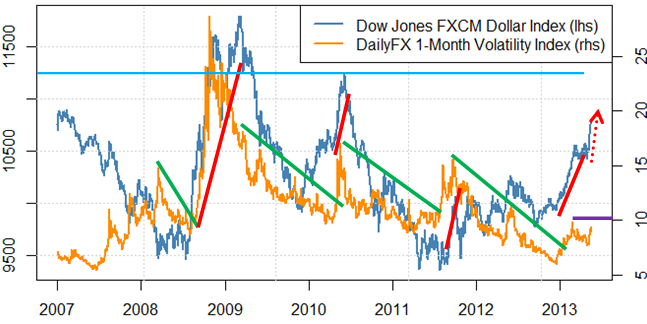 The Dollar’s Surging, but Why Might it Rally Even Further?

Article summary: The Dollar has surged to its highest since late 2010. There are some big “ifs”, but if things fall into place the USDOLLAR could rocket even higher.

The US Dollar has surged to its highest levels since late 2010. Why do I think it has further room to run?

Put simply, markets were far too quiet coming into this. The Dollar surge was long overdue.

Below we plot the Dow Jones FXCM Dollar Index (USDOLLAR) against the DailyFX 1-Month Volatility Index. Without getting lost in the details, the volatility index measures prices that traders are paying for volatility; “1-Month” indicates that these are prices for the month ahead.

If it’s high, it means that traders think the Dollar is going to move significantly. If it’s low, the opposite is true. We note major downtrends in volatility prices as well as major Dollar breakouts coded by colors below.

Vols are once again exploding higher off of an intermediate low, but they haven’t even taken out year-to-date peaks. The substantial volatility break in January marked the start of a substantial Dollar surge, and yet the USDOLLAR itself is well-below 2010 highs.

There’s obviously risk that vols won’t break to higher highs, but if they do we think that the USDOLLAR could easily follow through to 2010 peaks near 11,000. To put that into context, the EURUSD hit multi-year lows of $1.19 at the time. That could mean the EURUSD moves nearly 1000 pips lower if vols surge further.

The most remarkable feature of the current Dollar surge is that it’s happening while (mostly) everything else is quiet. There seems to be a positive feedback loop involving Gold prices/commodities and the Greenback.

Why’s the Dollar up? Because gold is down. Why’s Gold down? Because the Dollar’s up. And so on… (h/t @KKerrFX on that gem) But the S&P 500 doesn’t seem to care.

But what if other major asset classes really start moving? That’s obviously a big “if”.

The S&P 500 rally has been its most consistent since a number of critical peaks, while we’re starting to see evidence that “the crowd” is finally beginning to capitulate and getting long the SPX500. And to be fair to American equity markets—they’re not even the worst offenders. The Japanese TOPIX is up an almost-unbelievable 70+% since November!

Why’s the S&P 500 at fresh records today? You might argue that this morning’s strong Consumer Confidence and Leading Indicators data is forcing the move. I think it mostly has to do with the fact that it’s a day that ends in the letter “Y”.

Jokes aside, equities are hitting peaks with such consistency that it’s laughable, and yet the so-called “Fear Index” in the S&P VIX is at a paltry 12.5%. This is far from normal.

If and when the S&P 500 sells off, watch out below. This will almost certainly coincide with a burst of the Bond bubble—which could only add fuel to the virtually-guaranteed Dollar rally.

If you’ve read this far you probably see some merit in my argument and/or you have nothing better to do (I hope it’s the former). If you’re like me and think this is the start of a larger Dollar surge, here’s how I’m looking to play it:

Our retail sentiment-based trading strategies continue to buy the US Dollar across the board, and they’ll likely continue doing so as long as our retail trader sample continues to do the opposite.

I think those USD-long positions are especially attractive in currencies with higher volatility prices. I compare current vols to their 90-calendar day trading range to produce a standard metric with which to pick currencies. Below is that strategy bias table: 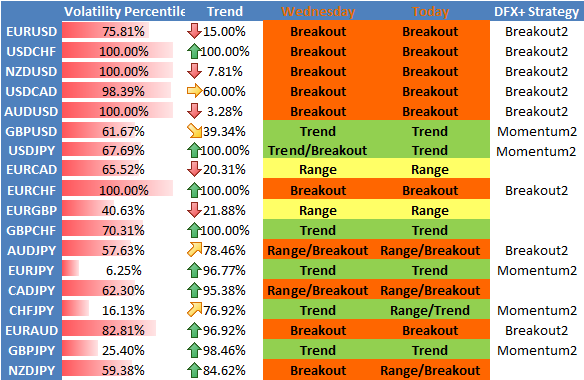 The table above makes it clear that traders are paying big prices for AUDUSD, USDCHF, NZDUSD, USDCAD, and EURCHF volatility in particular. Far be it from me to second-guess some of the most sophisticated traders in the world—these are the pairs which I’ll watch.

I’m not alone here: our Senior Technical and Market strategists believe the Australian Dollar and Swiss Franc could be among the biggest losers against the resurgent Greenback.

Could the Dollar rally further even if the S&P 500 and bond markets continue their incredible runs? Recent history suggests it could. But if we’re truly at key inflection points in other markets, the Dollar could go much, much higher.

And to be clear it’s not often a great idea to get long the USD into Friday’s close, but we suspect the week ahead will bring further opportunities. If the Dollar pulls back, I’ll treat it as an opportunity to buy.

Automate the Range2 trading system via the FXCM Apps store