AUD/USD falls back from a fresh monthly high (0.6916) as the update to the US Consumer Price Index (CPI) boosts expectations for another 75bp Federal Reserve rate hike, but data prints coming out of Australia may curb the recent decline in the exchange rate as job growth is expected to recover in August.

AUD/USD snaps the series of higher highs and lows from last week on the back of US Dollar strength, and the exchange rate may face a further decline over the coming days amid the failed attempts to close above the 50-Day SMA (0.6892).

As a result, AUD/USD may track the negative slope in the moving average as CME FedWatch Tool now reflects a 100% probability for a 75bp rate hike on September 21, but the update to Australia’s Employment report may prop up the exchange rate ahead of the FOMC meeting as the economy is anticipated to add 35.0K jobs in August.

An improvement in the labor market may generate a bullish reaction in AUD/USD as it raises the Reserve Bank of Australia’s (RBA) scope to implement a restrictive policy, but another unexpected contraction in job growth may force the central bank to shift gears as Governor Philip Lowe and Co. plan to keep the “economy on an even keel.”

In turn, developments coming out of Australia may sway AUD/USD over the coming days as the RBA “expects to increase interest rates further over the months ahead,” but a further decline in the exchange rate may fuel the tilt in retail sentiment like the behavior seen earlier this year. 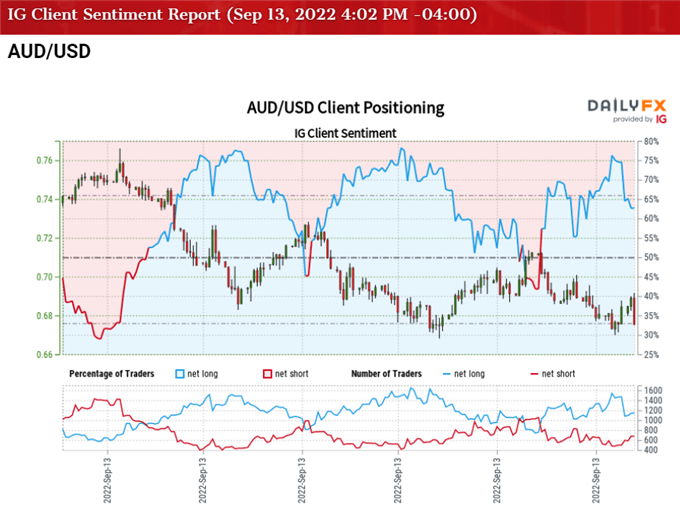 The IG Client Sentiment report shows 73.24% of traders are currently net-long AUD/USD, with the ratio of traders long to short standing at 2.74 to 1.

The number of traders net-long is 12.77% higher than yesterday and 12.31% lower from last week, while the number of traders net-short is 30.63% lower than yesterday and 8.54% lower from last week. The decline in net-long interest has done little to alleviate the crowding behavior as 70.54% of traders were net-long AUD/USD last week, while the drop in net-short position comes as the exchange rate managed to hit a fresh monthly high (0.6916) earlier this week.

With that said, a rebound in Australia Employment may curb the recent decline in AUD/USD as it encourages the RBA to further normalize monetary policy, but the failed attempts to close above the 50-Day SMA (0.6892) may lead to a test of the monthly low (0.6699) as it snaps the series of higher highs and lows from last week. 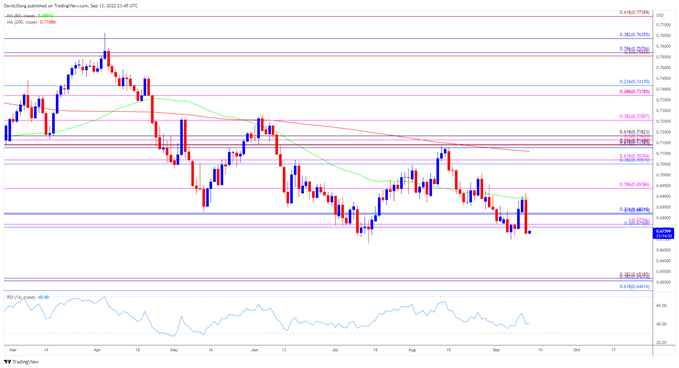