USD/CAD depreciates for the fourth consecutive day despite the kneejerk reaction to the Bank of Canada (BoC) interest rate decision, and the failed attempts to test the yearly high (1.3224) may lead to a larger pullback in the exchange rate as it appears to be mirroring the price action from July.

However, the update to the US Consumer Price Index (CPI) may generate a bullish reaction in the Greenback as the core reading, which strips out volatile items like energy and food prices, is expected to 6.1% in August from 5.9% per annum the month prior.

Evidence of persistent price growth may curb the recent decline in USD/CAD as it encourages the Federal Reserve to retain its current approach in combating inflation, and speculation for another 75bp rate hike may keep the exchange rate above the 50-Day SMA (1.2954) ahead of the next interest rate decision on September 21 with the central bank on course to carry out a restrictive policy.

Until then, data prints coming out of the US may sway USD/CAD as the BoC implements a smaller rate hike in September, but a further decline in the exchange rate may lead to a flip in retail sentiment like the behavior seen earlier this year. 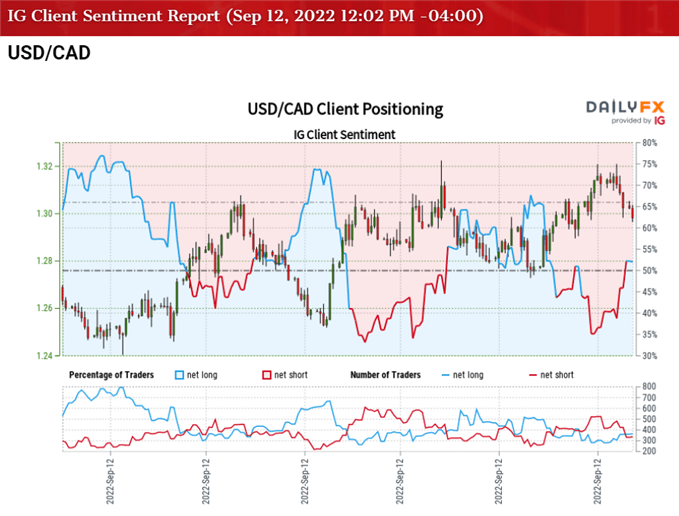 The IG Client Sentiment report shows 47.72% of traders are currently net-long USD/CAD, with the ratio of traders short to long standing at 1.10 to 1.

The number of traders net-long is 9.94% higher than yesterday and 18.45% higher from last week, while the number of traders net-short is 25.29% higher than yesterday and 6.44% lower from last week. The jump in net-long interest has alleviated the crowding behavior as 40.87% of traders were net-long USD/CAD at the end of August, while the decline in net-short position comes as the exchange rate trades to a fresh monthly low (1.2964).

With that said, an uptick in the core US CPI may curb the recent decline in USD/CAD as it fuels speculation for a 75bp rate hike, but the exchange rate may continue to give back the advance from the August low (1.2728) as it extends the series of lower highs and lows from last week. 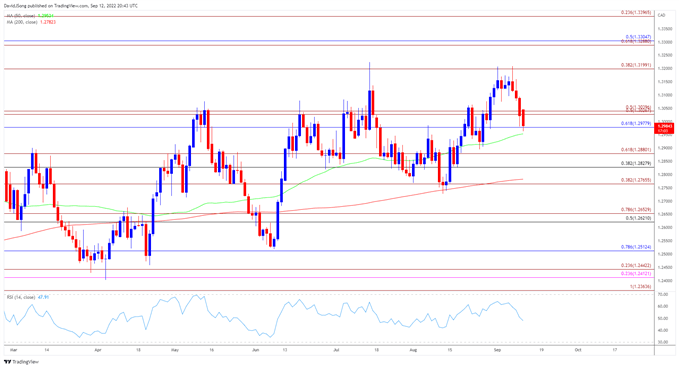