The price of oil halts a three-day selloff following a larger-than-expected decline in US inventories, and crude may stage a larger rebound over the coming days as it snaps the series of lower highs and lows carried over from the previous week.

Data prints coming out of the US appear to be propping up the price of oil as the 7.056M decline in crude inventories instill an improved outlook for consumption, and it remains to be seen if the developments will influence the Organization of Petroleum Exporting Countries (OPEC) as the group plans to increase output by “0.1 mb/d for the month of September 2022.”

Evidence of robust demand may encourage OPEC boost production throughout the remainder of the year even as the most recent Monthly Oil Market Report (MOMR) warns that “volatility in futures markets remained fueled by expectations of lower GDP growth,” and the price of oil may face headwinds ahead of the next Ministerial Meeting on September 5 as the update reveals that “for 2022, world oil demand is foreseen to rise by 3.1 mb/d, a downward revision of 0.3 mb/d from last month’s estimate.” 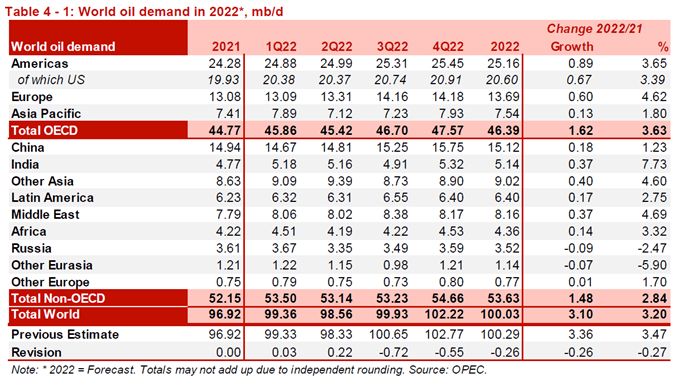 The forecasts suggest OPEC will continue to boost production as energy consumption is expected to pickup in 2023, but the signs of limited supply may keep the price of oil afloat as US output narrows for the first time in five-weeks.

A deeper look at the figures from the Energy Information Administration (EIA) show weekly field production narrowing to 12,100K in the week ending August 12 from 12,200K the week prior, and current market conditions may lead to a near-term rebound in the price of oil as indications of robust demand are met with signs of supply-side constraints.

With that said, the price of oil may stage a larger recovery over the coming days as it snaps the series of lower highs and lows carried over from the previous week, but rebound from the monthly low ($85.73) may turn out to be a near-term correction as crude fails to defend the February low ($86.55). 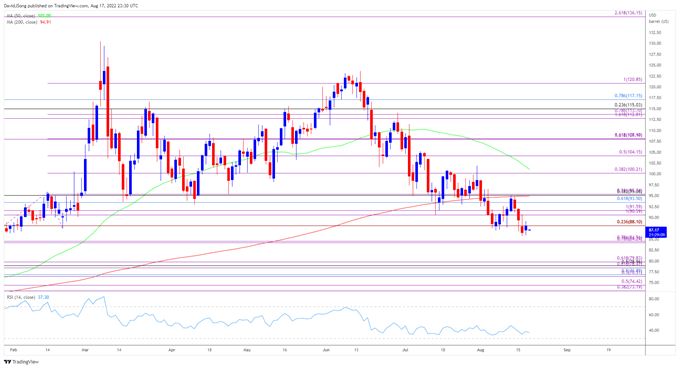