EUR/USD initiates a series of higher highs and lows as it attempts to retrace the bearish reaction to the US Non-Farm Payrolls (NFP) report, but fresh data prints coming out of the US may continue to influence the exchange rate as the update to the Consumer Price Index (CPI) is anticipated to show sticky inflation.

EUR/USD appears to be unfazed by the hawkish comments from Federal Reserve Governor Michelle Bowmanas it consolidates within the opening range for August, and it remains to be seen if the US CPI will influence the exchange rate as the headline reading is expected to narrow to 8.7% from 9.1% per annum in June.

However, another uptick in the core CPI may lead to a bearish reaction in EUR/USD as the index is projected to increase to 6.1% from 5.9% per annum during the same period, and evidence of sticky inflation may push the Fed to carry out a highly restrictive policy as Governor Bowman warns of “a significant risk of high inflation into next year.”

In turn, the Federal Open Market Committee (FOMC) may retain the current path in implementing higher interest rates as Governor Bowen argues that “similarly-sized increases should be on the table until we see inflation declining in a consistent, meaningful, and lasting way,” and expectations for another 75bp Fed rate hike in September may drag on EUR/USD with Chairman Jerome Powell and Co. on track to push the Fed Funds rate above neutral.

Until then, fresh data prints coming out of the US may sway EUR/USD as it consolidates within the opening range for August, while the tilt in retail sentiment looks poised to persist as traders have been net-long the pair for most of the year. 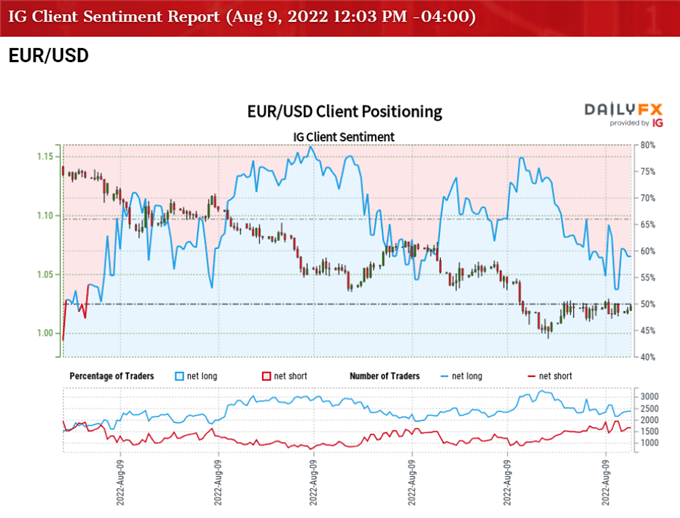 The IG Client Sentiment report shows 51.34% of traders are currently net-long EUR/USD, with the ratio of traders long to short standing at 1.05 to 1.

With that said, EUR/USD may continue to consolidate as the recovery from the yearly low (0.9952) fails to produce a test of the former support zone around the May low (1.0349), but the update to the US CPI may drag on the exchange rate should the data print fuel speculation for another 75bp Fed rate hike. 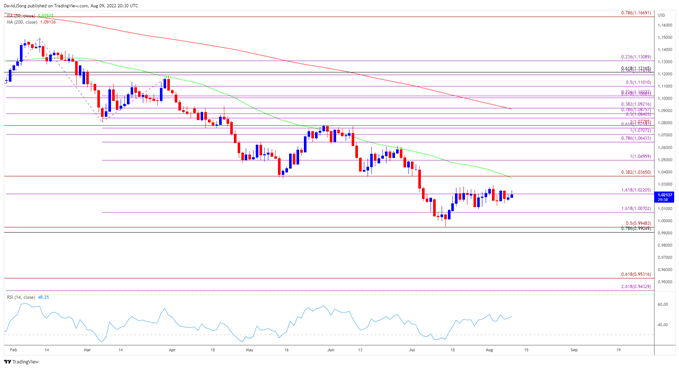