EUR/USD trades to a fresh weekly high (1.0273) as it extends the series of higher highs and lows carried over from last week, but the European Central Bank (ECB) interest rate decision may drag on the exchange rate if the Governing Council lays out a preset path in normalizing monetary policy.

EUR/USD appears to have reversed course ahead of the December 2002 low (0.9859) as the Relative Strength Index (RSI) recovers from oversold territory, and the exchange rate may stage a larger rebound as the ECB is expected to deliver a rate hike for the first time since 2011.

The ECB has already expressed plans to increase Euro Area interest rates “by 25 basis points at our July monetary policy meeting,” and it seems as though the Governing Council will follow its major counterparts as the central bank anticipates to “raise the key ECB interest rates again in September.”

It remains to be seen if the ECB will step up its effort to combat inflation as the account of the June meeting reveals that “it was broadly agreed that the Governing Council should at this point be more specific about its expectations for the September meeting and, in particular, open the door to an increase in the key ECB interest rates by more than 25 basis points,” and a shift in the forward guidance for monetary policy may generate a bullish reaction in the Euro if President Christine Lagarde and Co. forecast a steeper path for Euro Area interest rates.

However, EUR/USD may struggle to hold its ground if the ECB highlights a gradual path in normalizing monetary policy, and the advance from the yearly low (0.9952) may turn out to be a correction in the broader trend as a growing number of Federal Reserve officials show a greater willingness to implement a restrictive policy.

In turn, EUR/USD may continue to track the negative slope in the 50-Day SMA (1.0464) as the Federal Open Market Committee (FOMC) appears to be on track to deliver a 75bp rate hike later this month, while the tilt in retail sentiment looks poised to persist as trades have been net-long the pair for most of 2022. 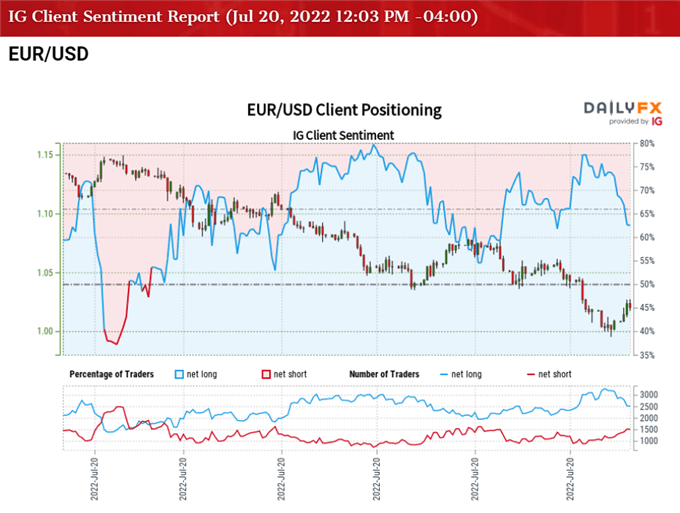 The IG Client Sentiment report shows 61.83% of traders are currently net-long EUR/USD, with the ratio of traders long to short standing at 1.62 to 1.

With that said, the ECB’s forward guidance for monetary policy may largely influence EUR/USD as the central bank carries out its hiking cycle, but the advance from the yearly low (0.9952) may turn out to be a correction in the broader trend as the 50-Day SMA (1.0464) continues to reflect a negative slope. 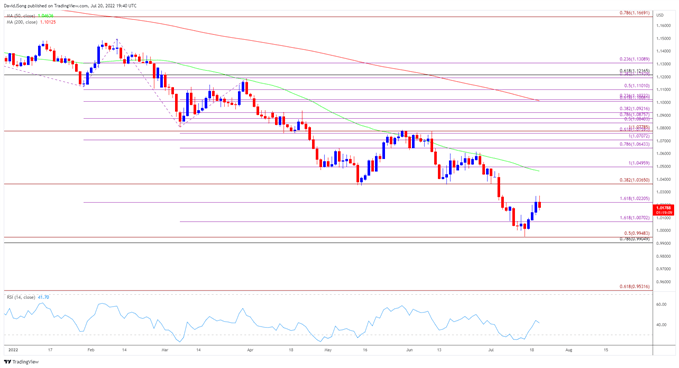