AUD/USD appears to be reversing course ahead of the yearly low (0.6968) amid the larger-than-expected the Reserve Bank of Australia (RBA) rate hike, and recent developments in the Relative Strength Index (RSI) point to a larger rebound in the exchange rate as the oscillator climbs above 30 to offer a textbook buy signal.

AUD/USD halts a three-day decline as the RBA alters the course for monetary policy, and the bearish momentum may continue to abate over the coming days as long as the RSI recovers from oversold territory.

However, the Federal Reserve interest rate decision may rattle the rebound from the monthly low (0.7230) as the central bank is widely expected to normalize monetary policy at a faster pace, and a material change in the Fed’s exit strategy may spur another run at the yearly low (0.6968) if Chairman Jerome Powell and Co. embark on quantitative tightening (QT).

As a result, a 50bp rate hike along with plans to wind down the Fed’s balance sheet sway the near-term outlook for AUD/USD as the Federal Open Market Committee (FOMC) ramps up its efforts to control inflation, and current market conditions may continue to benefit the Greenback as the deterioration in risk appetite looks poised to persist.

In turn, the US Dollar may continue to outperform against its Australian counterpart as the RBA is “not currently planning to sell the government bonds that the Bank purchased during the pandemic,” and a further decline in the exchange rate is likely to fuel the recent flip in retail sentiment like the behavior seen during the previous year. 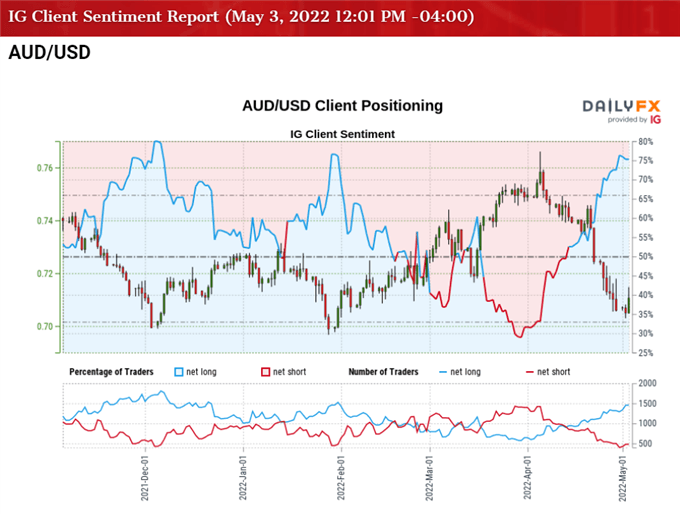 The IG Client Sentiment report shows 73.08% of traders are currently net-long AUD/USD, with the ratio of traders long to short standing at 2.71 to 1.

The number of traders net-long is 3.64% higher than yesterday and 15.69% higher from last week, while the number of traders net-short is 2.25% higher than yesterday and 12.08% lower from last week. The rise in net-long interest has helped to preserve the crowding behavior as 73.14% of traders were net-long AUD/USD last week, while the decline in net-short position comes as the exchange rate halts a three-day decline.

With that said, recent price action raises the scope for a larger rebound in AUD/USD as the RSI bounces back from oversold territory, but the Fed rate decision may undermine the recent rebound in the exchange rate if Chairman Powell and Co. normalize monetary policy at a faster pace. 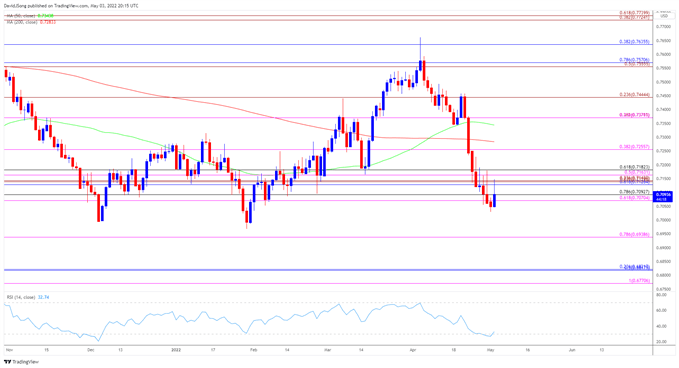