AUD/USD trades to a fresh monthly low (0.7055) as it extends the series of lower highs and lows from last week, and recent developments in the Relative Strength Index (RSI) warn of a further decline in the exchange rate as it pushes into oversold territory for the first time in 2022.

AUD/USD is on track to test the February low (0.7033) as it gives back the advance following the larger-than-expected uptick in Australia’s Consumer Price Index (CPI), and the US Dollar may continue to appreciate against its major counterparts as it benefits from the ongoing deterioration in risk appetite.

The shift in investor confidence looks poised to persist ahead of the next Reserve Bank of Australia (RBA) interest rate decision on May 3 as the US economy unexpectedly contracts in the first quarter of 2022, and the move below 30 in the RSI is likely to be accompanied by a further decline in AUD/USD like the behavior seen late last year.

However, a change in RBA policy may curb the recent selloff in AUD/USD as the central bank is expected to lift the official cash rate (OCR) from 0.10% to 0.25%, and a material change in the forward guidance for monetary policy may shore up the Australian Dollar if Governor Philip Lowe and Co. prepare households and businesses for a series of rate hikes.

Until then, swings in risk appetite may sway AUD/USD as the US stock market appears to be finding support, but a further decline in the exchange rate may continue to fuel the recent flip in retail sentiment like the behavior seen during the previous year. 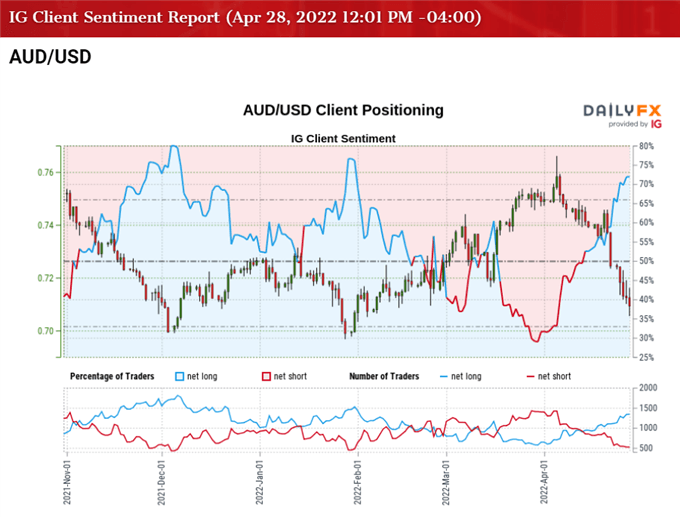 The IG Client Sentiment report shows 73.14% of traders are currently net-long AUD/USD, with the ratio of traders long to short standing at 2.72 to 1.

The number of traders net-long is 5.49% higher than yesterday and 28.41% higher from last week, while the number of traders net-short is 14.48% lower than yesterday and 41.14% lower from last week. The rise in net-long interest has fueled the crowding behavior as 69.25% of traders were net-long AUD/USD earlier this week, while the decline in net-short position comes as the exchange rate trades to a fresh monthly low (0.7055).

With that said, AUD/USD may attempt to test the February low (0.7033) as it extends the series of lower highs and lows carried over from last week, and developments in the RSI may show the bearish momentum gathering pace as the indicator pushes below 30 for the first time this year. 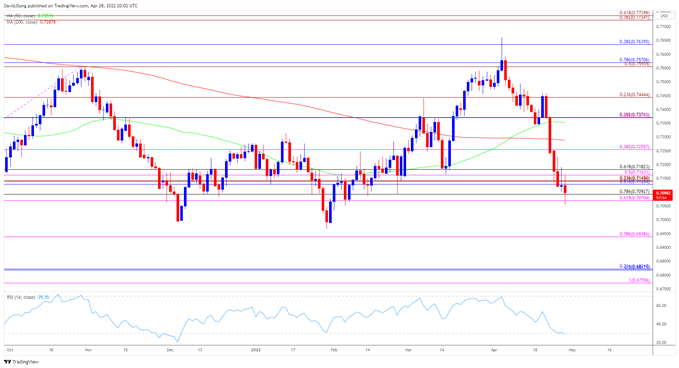