USD/CAD retraces the decline from the start of the week as Federal Reserve Governor Lael Brainard warns that the central bank could “reduce the balance sheet at a rapid pace as soon as our May meeting,” but data prints coming out of Canada may push the exchange rate towards the November low (1.2352) as the employment report is anticipated to show a further improvement in the labor market.

USD/CAD cleared the March low (1.2429) as it carves a series of lower highs and lows, and the commodity bloc currencies may continue to outperform the Greenback over the coming days as long as the recovery in risk appetite persist.

However, speculation for a further shift in Fed policy appears to be propping up USD/CAD as the central bank looks to winddown its balance sheet in 2022, and it remains to be seen if the Federal Open Market Committee (FOMC) will adjust its exit strategy at its next interest rate decision on May 4 as Chairman Jerome Powell and Co. show a grater willingness to normalize monetary policy at a faster pace.

Until then, swings in investor confidence along with developments coming out of Canada may sway USD/CAD as the Bank of Canada (BoC) “expects interest rates will need to rise further,” and it seems as thought Governor Tiff Macklem and Co. will deliver a back-to-back rate hike as the employment report is anticipated to show the economy adding 80.0K jobs in March.

At the same time, the Unemployment Rate is expected to narrow to 5.3% from 5.5% in February, which would mark the lowest reading since 2019, and a further improvement in the labor market may push the BoC to implement another 25bp rate hike as the central bank pledges to “use its monetary policy tools to return inflation to the 2% target and keep inflation expectations well-anchored.”

In turn, USD/CAD may continue to trade to fresh yearly lows ahead of the next BoC meeting on April 13 as the central bank will “also be considering when to end the reinvestment phase and allow its holdings of Government of Canada bonds to begin to shrink,” and the decline from the March high (1.2901) may continue to coincide with the tilt in retail sentiment as traders have been net-long the pair since last month. 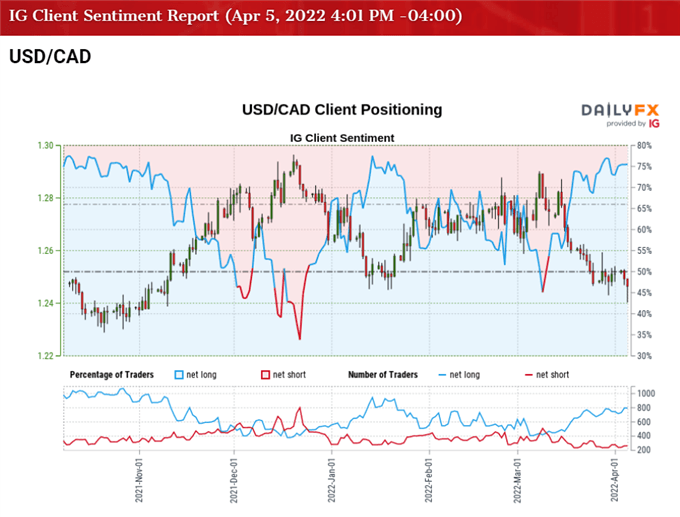 The IG Client Sentiment report shows 73.79% of traders are currently net-long USD/CAD, with the ratio of traders long to short standing at 2.82 to 1.

The number of traders net-long is 9.51% lower than yesterday and 9.74% lower from last week, while the number of traders net-short is 1.96% lower than yesterday and 4.60% higher from last week. The decline in net-long position could be a function of stop-loss orders getting triggered as USD/CAD trades to a fresh yearly low (1.2403), while the rise in net-short interest has helped to alleviate the tilt in retail sentiment as 70.95% of traders were net-long the pair last week.

With that said, failure to defending the opening range for 2022 may keep USD/CAD under pressure as it clears the March low (1.2429), and another uptick in Canada Employment may push the exchange rate towards the November low (1.2352). 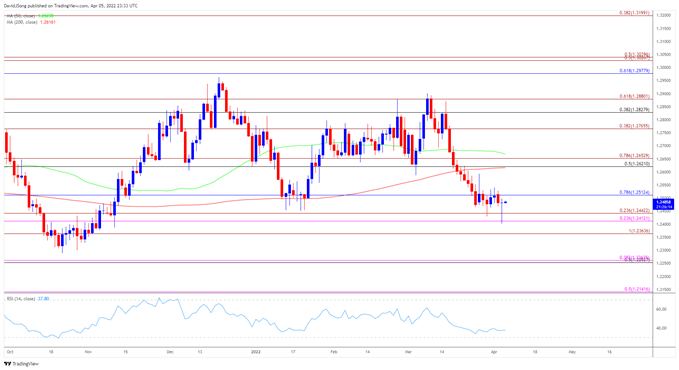