USD/CAD Fails to Defend 2022 Opening Range Ahead of US PCE, NFP Reports

USD/CAD trades to a fresh yearly low (1.2429) as commodity bloc currencies continue to outperform against the Greenback, and the exchange rate may depreciate over the remainder of the week as it fails to defend the opening range for 2022.

USD/CAD Fails to Defend 2022 Opening Range Ahead of US PCE, NFP Reports

USD/CAD appears to be unfazed by the better-than-expected ADP Employment report as it clears the January low (1.2450), and the improvement in risk appetite may continue to influence the exchange rate as the Federal Reserve provides little details surrounding the quantitative tightening (QT) cycle.

As a result, it remains to be seen if the update to the core US Personal Consumption Expenditure (PCE) Price Index will sway USD/CAD as the Fed’s preferred gauge for inflation is expected to widen for the sixth consecutive month, with the gauge projected to increase to 5.5% from 5.2% per annum in January, which would mark the highest reading since 1983. At the same time, the Non-Farm Payrolls (NFP) report is anticipated to show a further improvement in the labor market as employment is projected to climb 490K in March, and evidence of persist inflation along with another uptick in job growth may push the Federal Reserve to embark on QT at its next interest rate decision on May 4 as “the Committee expects to begin reducing its holdings of Treasury securities and agency debt and agency mortgage-backed securities at a coming meeting.”

Until then, swings in investor confidence may influence USD/CAD amid hopes of a Russia-Ukraine peace deal, but the tilt in retail sentiment looks poised to persist as retail traders have been net-long the pair for most of the month. 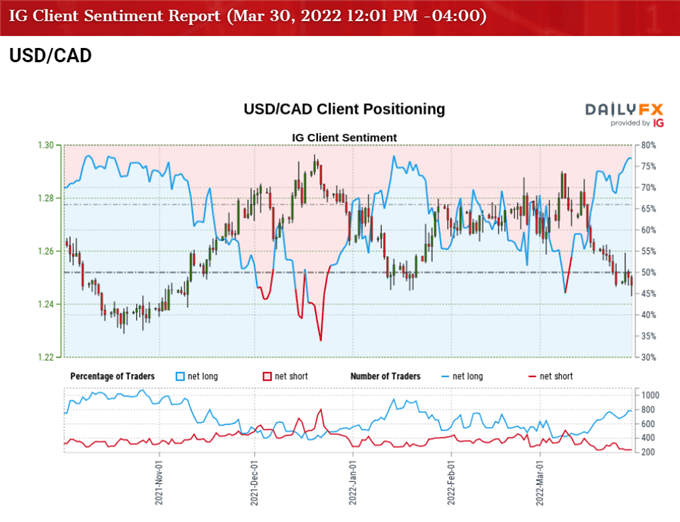 The IG Client Sentiment Report shows 70.95% of traders are currently net-long USD/CAD, with the ratio of traders long to short standing at 2.44 to 1.

The number of traders net-long is 4.61% lower than yesterday and 0.53% lower from last week, while the number of traders net-short is 27.08% higher than yesterday and 2.69% higher from last week. The decline in net-long position comes as USD/CAD trades to a fresh yearly low (1.2429), while the rise in net-short interest has helped to alleviate the crowding behavior as 73.18% of traders were net-long the pair earlier this week.

With that said, recent price action raises the scope for a further decline in USD/CAD as it fails to defend the opening range for 2022, but fresh data prints coming out of the US may curb the recent decline in the exchange rate as rising inflation along with indications of a tight labor market puts pressure on the Federal Open Market Committee (FOMC) to normalize monetary policy at a faster pace. 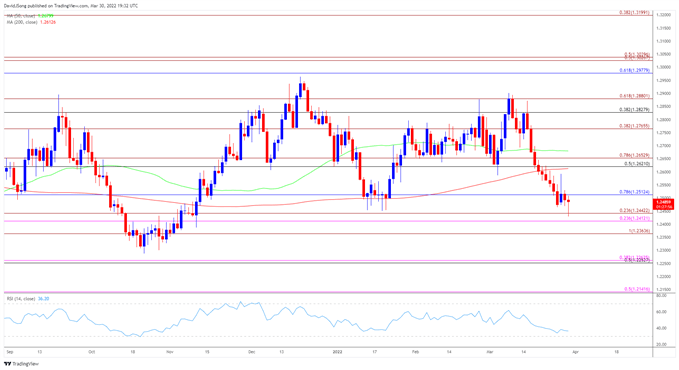