AUD/USD trades to a fresh yearly high (0.7528) as it extends the series of higher highs and lows from the start of the week, and the rally may push the Relative Strength Index (RSI) into overbought territory for the first time in 2022 as it appears to be on track to test the October high (0.7556).

AUD/USD appreciates amid the ongoing improvement in investor confidence, with the recent strength in commodity bloc currencies largely coinciding with the rise in global equity prices, and a further improvement in risk appetite may continue to push the exchange rate to fresh yearly highs even as a growing number of Federal Reserve officials show a greater willingness to adjust the exit strategy.

In an interview with Bloomberg News, St. Louis Fed President James Bullard, who votes on the Federal Open Market Committee (FOMC) this year, argues that the central bank “needs to move aggressively to keep inflation under control,” with the official going to say that “ we need to get to neutral at least so that we’re not putting upward pressure on inflation.”

As a result, Bullard insists that raising interest rates “faster is better” after voting for a 50bp rate hike earlier this month, and it remains to be seen if the FOMC will continue to adjust the forward guidance for monetary policy as Bullard hints at a “passive runoff” for winding down the Fed’s balance sheet.

Limited details surrounding the Fed’s quantitative tightening (QT) cycle may keep AUD/USD afloat ahead of the next FOMC interest rate decision on May 4, but a further appreciation in the exchange rate may fuel the recent flip in retail sentiment like the behavior seen during the previous year. 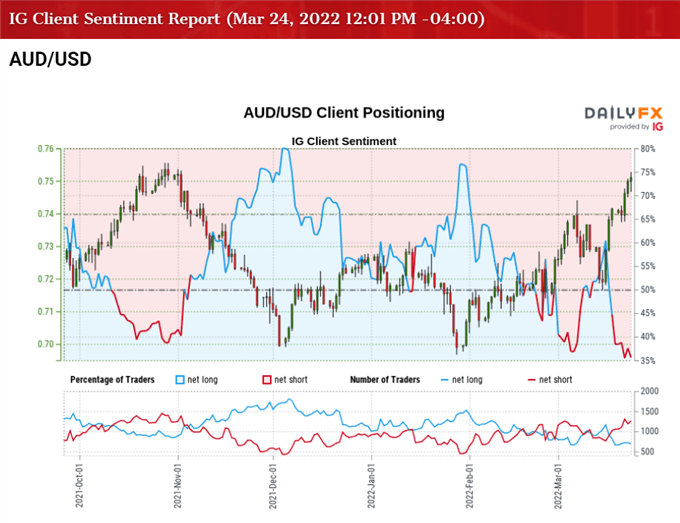 The IG Client Sentiment report shows only 36.46% of traders are currently net-long AUD/USD, with the ratio of traders short to long standing at 1.74 to 1.

The number of traders net-long is 8.14% lower than yesterday and 24.65% lower from last week, while the number of traders net-short is 0.66% higher than yesterday and 30.90% higher from last week. The decline in net-long position could be a function of profit-taking behavior as AUD/USD trades to a fresh yearly high (0.7528), while the jump in net-short interest has fueled the tilt in retail sentiment as 37.84% of traders were net-long the pair earlier this week.

With that said, it appears to be on track to test the October high (0.7556) as it extends the series of higher highs and lows from the start of the week, but the advance from the January low (0.6968) may turn out to be a correction in the broader trend as a growing number of Fed officials show a greater willingness to normalize monetary policy at a faster pace. 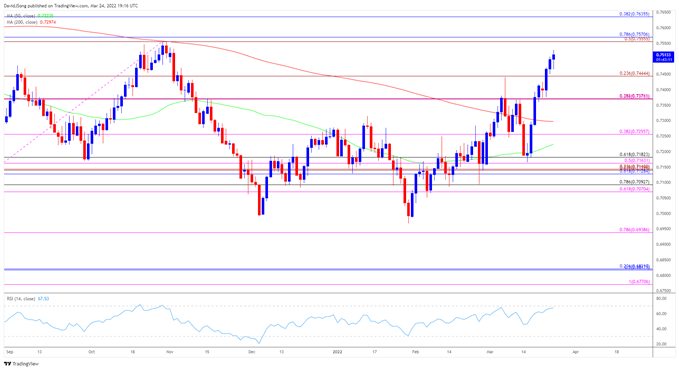