The four-day rally in AUD/USD appears to be stalling as it struggles to test the yearly high (0.7441), and the exchange rate may consolidate over the remainder of the month if it snaps the series of lower highs and lows carried over from last week.

AUD/USD gives back the advance from the start of the week as Federal Reserve Chairman Jerome Powellreiterates that “the economy is very strong and is well positioned to handle tighter monetary policy,” with the central bank head going onto say that the central bank could “move more aggressively by raising the federal funds rate by more than 25 basis points” while speaking at the annual conference held by National Association for Business Economics (NABE).

It seems as though the Federal Open Market Committee (FOMC) will prepare American households and businesses for a further shift in monetary policy as Chairman Powell warns that “an extended period of high inflation could push longer-term expectations uncomfortably higher, which underscores the need for the Committee to move expeditiously,” and a growing number of Fed officials may look to adjust the exit strategy at the next interest rate decision on May 4 as the central bank pledges to “restore price stability.”

Until then, swings in investor confidence may sway AUD/USD as the rebound in risk appetite appears to be propping up the commodity bloc currencies, and a further advance in the exchange rate may fuel the recent flip in retail sentiment like the behavior seen during the previous year. 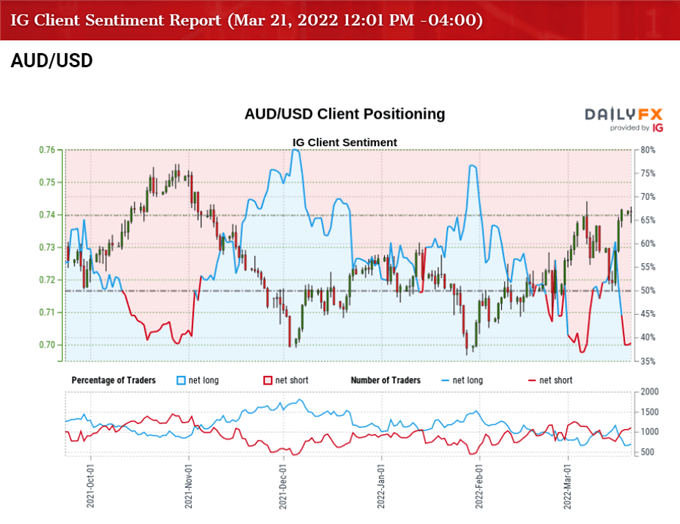 The IG Client Sentiment report shows 37.84% of traders are currently net-long AUD/USD, with the ratio of traders short to long standing at 1.64 to 1.

The number of traders net-long is 15.65% higher than yesterday and 25.76% lower from last week, while the number of traders net-short is 18.48% higher than yesterday and 41.40% higher from last week. The decline in net-long position comes as AUD/USD struggles to retain the advance from the start of the week, while the jump in net-short interest has fueled the recent flip in retail sentiment as 40.65% of traders were net-long the pair during the first full-week of March.

With that said, AUD/USD may attempt to test the yearly high (0.7441) if it manages to retain the series of higher highs and lows carried over from last week, but the advance from the January low (0.6968) may turn out to be a correction in the broader trend as the Fed normalizes monetary policy ahead of theReserve Bank of Australia (RBA). 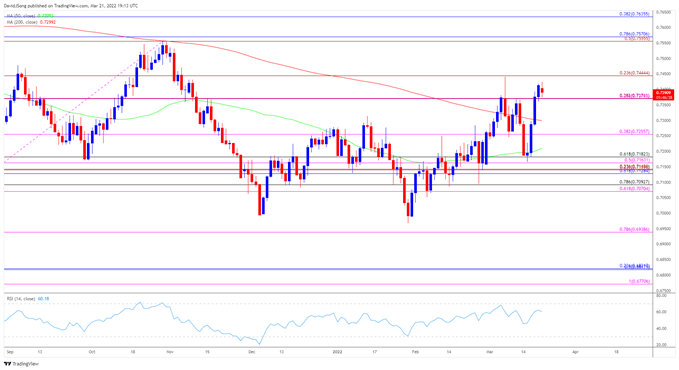