NZD/USD Rate Tests February High Ahead of US NFP Report

NZD/USD tests the February high (0.6809) as it extends the advance from earlier this week, but fresh data prints coming out of the US may drag on the exchange rate as the Non-Farm Payrolls (NFP) report is anticipated to show a further improvement in the labor market.

NZD/USD Rate Tests February High Ahead of US NFP Report

NZD/USD continues to trade within an upward trending channel after clearing the former support zone around the December low (0.6701), and the exchange rate may stage another attempt to test the January high (0.6891) as it carves a series of higher highs and lows.

However, the update to the US NFP report may spark a bullish reaction in the Greenback as the economy is anticipated to add 400K jobs in February, while the Unemployment Rate is expected to narrow to 3.9% from 4.0% during the same period.

A positive development may push the Federal Reserve to adjust its exit strategy as Chairman Jerome Powell prepares US lawmakers for a shift in monetary policy, and it remains to be seen if Fed officials will forecast a steeper path for the Fed Funds rate as the central bank is slated to release the updated Summary of Economic Projections (SEP) at the next interest rate decision on March 16.

Until then NZD/USD may stage another attempt to test the January high (0.6891) as it trades within an ascending channel, and a further appreciation in the exchange rate may fuel the recent flip in retail sentiment like the behavior seen during the previous year. 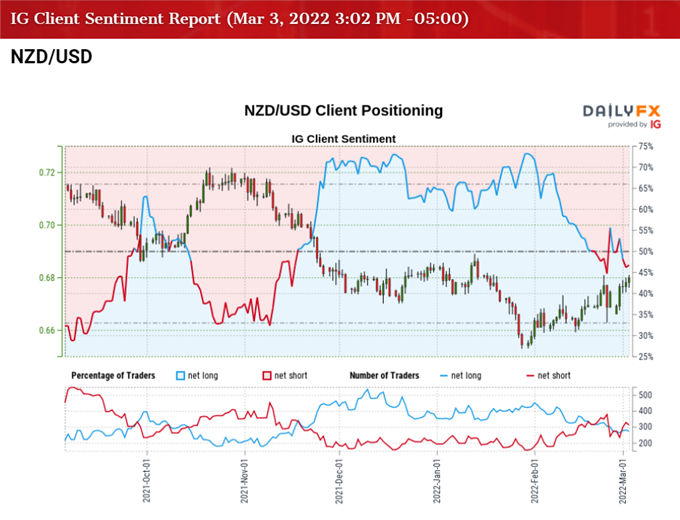 The IG Client Sentiment report shows 48.42% of traders are currently net-long NZD/USD, with the ratio of traders short to long standing at 1.07 to 1.

With that said, the rebound from the January low (0.6529) may turn out to be a correction in the broader trend as another uptick in US NFP is likely to put pressure on the Fed to adjust its exit strategy, but the exchange rate may stage further attempts to test the January high (0.6891) as it trades within an ascending channel. 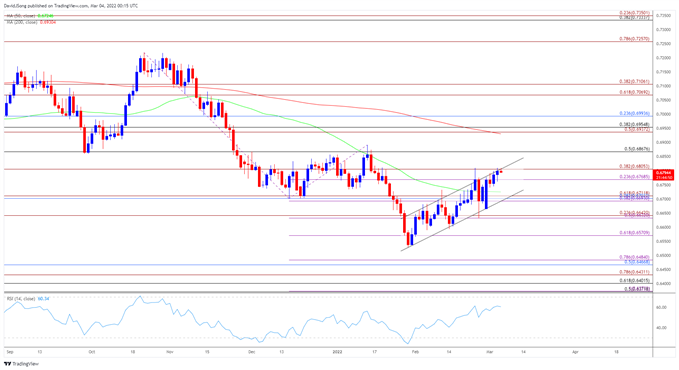