USD/CAD fills the price gap from the start of the week as there appears to be a recovery in investor confidence, and the Bank of Canada (BoC) interest rate decision may push the exchange rate toward the February low (1.2636) as the central bank is expected to deliver a 25bp rate hike.

USD/CAD clears last week’s low (1.2681) amid a rise in global equity prices, but the growing response by the US and its allies to the Russia-Ukraine war may influence the exchange rate as it disrupts the outlook for global growth.

Nevertheless, the BoC rate decision may fuel the recent series of lower highs and lows in USD/CAD as the central bank is widely anticipated to increase the benchmark interest rate to 0.50% from 0.25%, and an adjust in the forward guidance for monetary policy may push the exchange rate toward the February low (1.2636) if Governor Tiff Macklem and Co. prepare Canadian households and businesses for a series of rate hikes.

However, the BoC may carry out a gradual approach in normalizing monetary policy as “COVID-19 continues to affect economic activity unevenly across sectors,” and a dovish rate hike may prop up USD/CAD as the Federal Reserve looks to implement higher interest rates while unloading its balance sheet in 2022.

As a result, USD/CAD may track the February range ahead of the Federal Open Market Committee (FOMC) rate decision on March 16 as market participants brace for a material change in the forward guidance for US monetary policy, while the tile in retail sentiment looks poised to persist as traders have been net-long the pair since late-December. 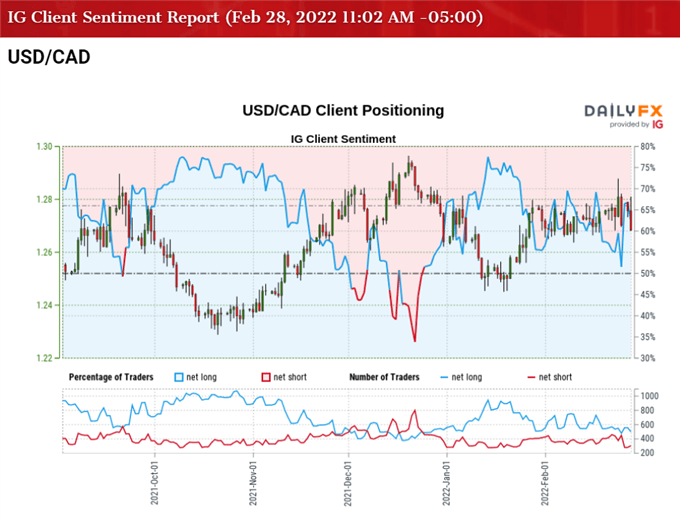 The IG Client Sentiment report shows 60.77% of traders are currently net-long USD/CAD, with the ratio of traders long to short standing at 1.55 to 1.

With that said, the BoC rate decision may push USD/CAD towards the February low (1.2636) as the central bank is expected to switch gears, but a dovish rate hike may keep the exchange rate within a defined range as the Fed appears to be on track to normalize monetary policy at a faster pace than its Canadian counterpart. 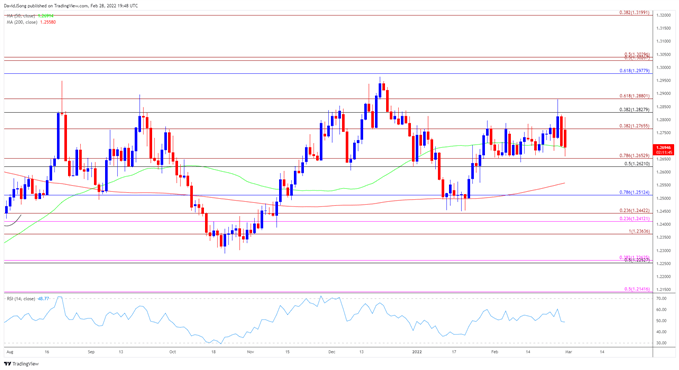