USD/JPY bounces back from a fresh weekly low (114.41) despite the slump in global equity prices, and fresh data prints coming out of the US economy may generate a larger rebound in the exchange rate as the Federal Reserve’s preferred gauge for inflation is expected to increase for the fifth consecutive month.

USD/JPY appears to have reversed ahead of the monthly low (114.15) to largely track the recent rebound in longer-dated US Treasury yields, and the exchange rate may stage another attempt to clear the opening range for 2022 as the Greenback appreciates against all of its major counterparts.

At the same time, the update to the US Personal Consumption Expenditure (PCE) Price Index may generate a bullish reaction in the Dollar as the Fed’s preferred gauge for inflation is anticipated to increase to 5.1% from 4.9% per annum in December, which would mark the highest reading since 1983.

Another uptick in the core PCE index may force the Federal Open Market Committee (FOMC) to adjust the forward guidance as “most participants noted that, if inflation does not move down as they expect, it would be appropriate for the Committee to remove policy accommodation at a faster pace than they currently anticipate,” and it remains to be seen if Chairman Jerome Powell and Co. will unveil a more detailed exit strategy at the next interest rate decision on March 16 as the central bank is slated to release the updated Summary of Economic Projections (SEP).

Until then, a further deterioration in risk appetite may keep USD/JPY afloat as Russia-Ukraine tensions appear to be spurring a flight to safety, and the diverging paths between the FOMC and Bank of Japan (BoJ)may continue to coincide with the crowding behavior seen in late-2021 as the recent flip in retail sentiment was short lived. 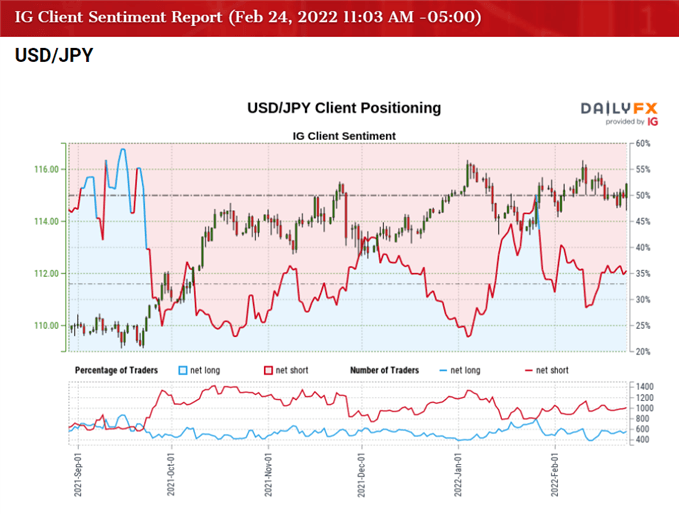 The IG Client Sentiment report shows 35.95% of traders are currently net-long USD/JPY, with the ratio of traders short to long standing at 1.78 to 1.

With that said, USD/JPY may stage another attempt to break out of the opening range for 2022 as it reverses ahead of the monthly low, and the update to the US PCE Price Index may push the exchange rate to fresh yearly highs as evidence of persistent inflation puts pressure on the FOMC to adjust its exit strategy. 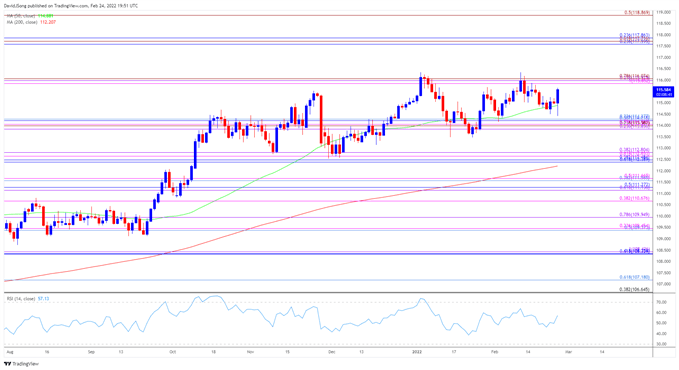