EUR/USD struggles to retain the advance from the start of the week as the US imposes the “first tranche” of sanctions against Russia, but the exchange rate may consolidate ahead of the update to the US Personal Consumption Expenditure (PCE) Price Index as it appears to be confined by the February range.

The Euro lags behind its Asia/Pacific counterparts as the Australian Dollar and New Zealand Dollar rally to fresh monthly highs against the Greenback, and headline surrounding Russia-Ukraine may continue to drag on EUR/USD as it puts pressure on the European Central Bank (ECB) to delay normalizing monetary policy.

It remains to be seen if the ECB will adjust the forward guidance as Russia-Ukraine tensions pose a risk to the economic outlook, and the central bank may merely attempt to buy time at its next interest rate decision on March 10 as “growth is expected to remain subdued in the first quarter.”

However, the threat of higher energy prices may push the Governing Council to unveil a more detailed exit strategy as the central bank acknowledges that “inflation is likely to remain elevated for longer than previously expected,” and expectations for looming shift in ECB policy may keep EUR/USD afloat as market participants brace for higher Euro Area interest rates.

Until then, swings in risk appetite may sway EUR/USD as the US and its allies stand ready to respond to Russia, but fresh data prints coming out of the US may produce a bullish reaction in the Greenback as the Federal Reserve’s preferred gauge for inflation is expected to increase for the fifth consecutive month.

The update to the US Personal Consumption Expenditure (PCE) Price Index is anticipated to show the core rate widening to 5.1% from 4.9% per annum in December, which would mark the highest reading since 1983, and evidence of heightening price pressures may drag on EUR/USD as it raises the scope of seeing the Federal Open Market Committee (FOMC) unloading the balance sheet sooner rather than later.

As a result, the advance from the January low (1.1121) may turn out to be a correction in the broader trend as the Fed appears to be on track to normalize monetary policy ahead of its European counterpart, but EUR/USD may track sideways going into March as both central banks look to switch gears over the coming months.

In turn, EUR/USD may continue to give back the advance from the February low (1.1221) as it struggles to retain the advance from the start of the week, but the range bound price action may lead to further shifts in retail sentiment like the behavior seen earlier this year. 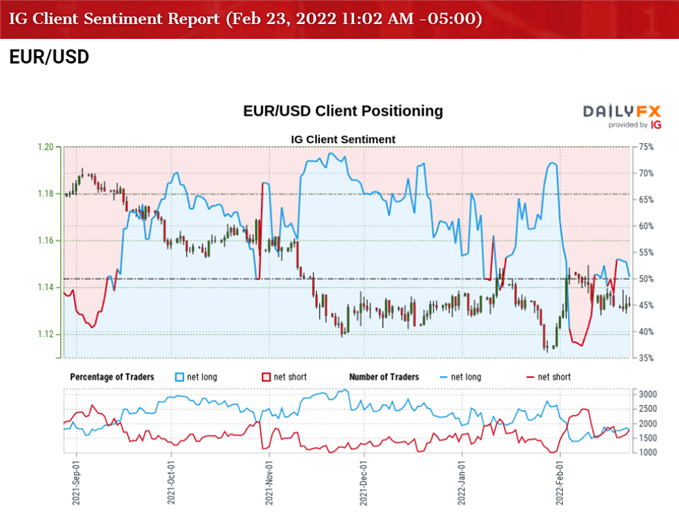 The IG Client Sentiment report shows 49.43% of traders are currently net-long EUR/USD, with the ratio of traders short to long standing at 1.02 to 1.

The number of traders net-long is 2.25% higher than yesterday and 3.55% lower from last week, while the number of traders net-short is 3.57% lower than yesterday and 0.05% higher from last week. The decline in net-long interest has fueled the recent flip in retail sentiment as 50.22% of traders were net-long EUR/USD last week, while the marginal rise in net-short position comes as the exchange rate pares the advance from the start of the week.

With that said, EUR/USD may trade within a defined range over the remainder of the month amid the looming shift in both Fed and ECB policy, but fresh data prints coming out of the US may drag on the exchange rate as inflation is expected to increase for the fifth consecutive month. 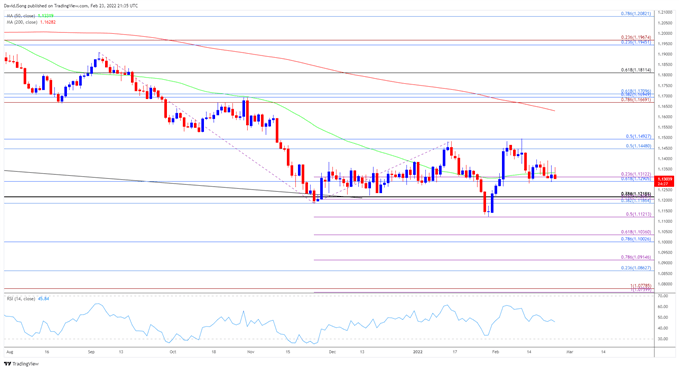