USD/JPY appears to be tracking the recent weakness in longer-dated Treasury yields as it trades to a fresh weekly low (114.85), and the exchange rate may continue to give back the advance from the monthly low (114.15) amid the failed attempt to clear the opening range for 2022.

Recent developments coming out of the US has dragged on USD/JPY as the Federal Open Market Committee (FOMC) Minutes warn that “financial conditions might tighten unduly in response to a rapid removal of policy accommodation,” and the comments suggest the central bank will carry out a gradual approach in normalizing monetary policy as “participants emphasized that the appropriate path of policy would depend on economic and financial developments.”

As a result, easing expectations for a material change in the Fed’s forward guidance may keep USD/JPY under pressure as market participants scale back bets for an aggressive hiking-cycle, and it remains to be seen if Chairman Jerome Powell and Co. will project a steeper path for the Fed’s Funds rate as the central bank is slated to release the updated Summary of Economic Projections (SEP) at its next interest rate decision on March 16.

Until then, USD/JPY may continue to track the yearly range following the failed attempt to clear the January high (116.35), but the recent consolidation in the exchange rate may turn out to be a correction in the broader trend as the FOMC prepares to implement higher interest rates while the Bank of Japan (BoJ) appears to be in no rush to scale back its non-standard tools.

In turn, USD/JPY may exhibit a bullish trend over the coming months amid the diverging paths between the FOMC and BoJ, while the tilt in retail sentiment looks poised to persist like the behavior seen during the previous year. 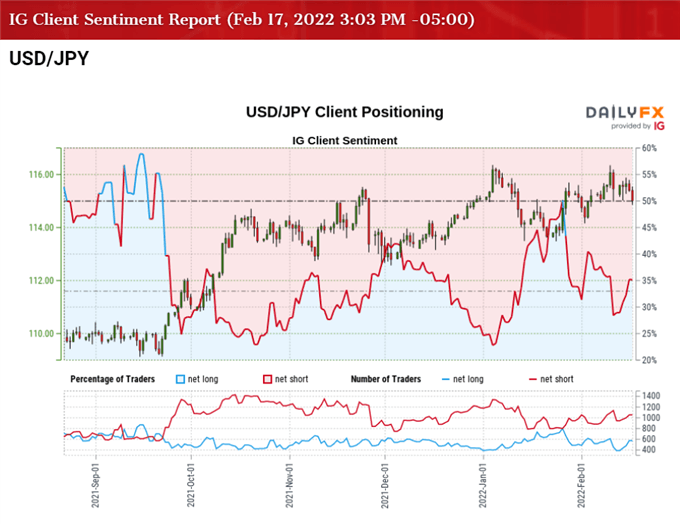 The IG Client Sentiment report shows 35.69% of traders are currently net-long USD/JPY, with the ratio of traders short to long standing at 1.80 to 1.

The number of traders net-long is 5.05% lower than yesterday and 21.11% higher from last week, while the number of traders net-short is 7.79% lower than yesterday and 8.99% lower from last week. The rise in net-long interest has helped to alleviate the crowding behavior as only 33.55% of traders were net-long USD/JPY earlier this week, while the decline in net-short position could be a function of profit-taking behavior as the exchange rate trades to a fresh weekly low (114.85)

With that said, USD/JPY may continue to give back the advance from the monthly low (114.15) amid the failed attempt to clear the January high (116.35), but the recent weakness in the exchange rate may turn out to be a correction in the broader trend with the FOMC on track to implement higher interest rates over the coming months. 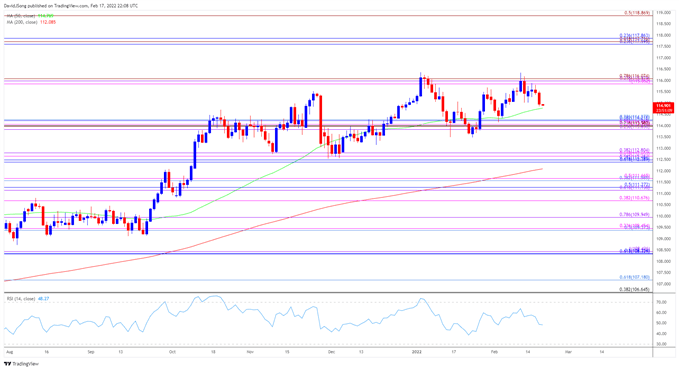