The price of oil tumbled to a fresh weekly low ($88.83) as the US State Department announced that negotiations with Iran “are in the midst of the very final stages,” but the recent weakness in crude may turn out to be a correction in the broader trend as long as it defends the monthly low ($86.75).

The price of oil extends the decline from the monthly high ($92.09) after showing a limited reaction to an unexpected rise in US inventories, and developments coming out of the Munich Security Conference on tap for February 18-20 may sway crude prices as hints of rolling back the US sanctions on Iran exports would boost the outlook for supply.

As a result, the Organization of Petroleum Exporting Countries (OPEC) may stick to the current production schedule over the coming months as the group plans to “adjust upward the monthly overall production by 0.4 mb/d for the month of March 2022,” and current market conditions may keep the price of oil afloat ahead of the next Ministerial Meeting on March 2 as the most recent Monthly Oil Market Report (MOMR) reveals that “world oil demand during 3Q21 and 4Q21 proved to be substantially more resilient than previouslyanticipated.” 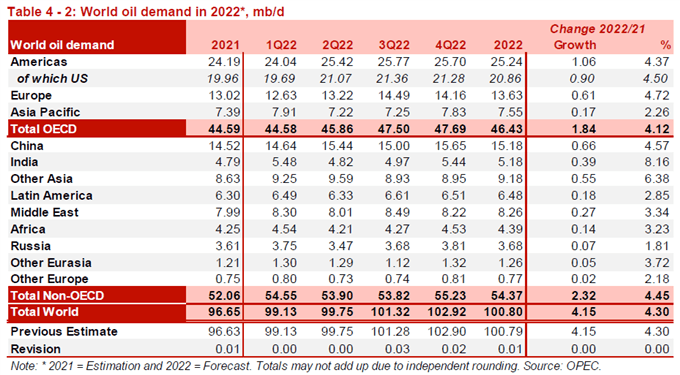 As a result, the report goes onto say that “in 2022, oil demand growth is expected at 4.2 mb/d unchanged from the previous month,” but it remains to be seen if the developments coming out of the US will influence OPEC and its allies as crude stockpiles increase for the first time in three weeks.

US inventories widened 1.121M in the week ending February 11 versus forecasts for a 1.572M decline, and a further rise in crude stockpiles may keep the price of oil under pressure as the Omicron variant continues to pose a threat to economic activity.

Nevertheless, the decline from the monthly high ($92.09) may turn out to be a correction in the broader trend as a deeper look at the figures from the Energy Information Administration (EIA) show weekly field production holding steady at 11,600K, and the slack in US output may act as a backstop for the price of oil as OPEC and its allies remain reluctant to adjust its production schedule.

With that said, the price of oil may continue to exhibit a bullish trend in 2022 as indications of limited supply are met with expectations of strong demand, and the recent weakness in crude may turn out to be a near-term correction as long as it defends the monthly low ($86.75). 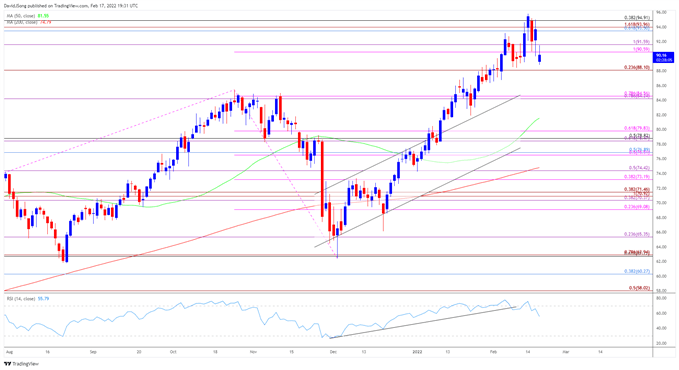