EUR/USD struggles to retain the advance driven by the shift in the European Central Bank’s (ECB) forward guidance, and fresh developments coming out of the US may influence the exchange rate as inflation is expected to increase for the fifth consecutive month.

EUR/USD barely cleared the January high (1.1483) following the ECB meeting as it rallied to a fresh yearly high (1.1484), and the exchange rate may continue to retrace the decline from the November high (1.1616) as it snaps the series of lower highs and lows from the start of the week.

However, the update to the US Consumer Price Index (CPI) may generate a bullish reaction in the US Dollar as the headline reading is expected to increase to 7.3% from 7.0% per annum in December, which would mark the highest print since 1982, and evidence of persistent inflation may force the Federal Reserve to adjust its exit strategy as the central bank prepares to implement higher interest rates.

It remains to be seen if Chairman Jerome Powell and Co. will project a steeper path for the Fed Funds rate as the central bank is slated to release the updated Summary of Economic Projections (SEP) at the next interest rate decision on March 15, and speculation for an imminent change in regime may keep EUR/USD under pressure as the Federal Open Market Committee (FOMC) appears to be on track to winddown the balance sheet in 2022.

In turn, the advance from the January low (1.1121) may turn out to be a correction in the broader trend as the 200-Day SMA (1.1668) retains the negative slope carried over from 2021, but a further advance in EUR/USD may fuel the recent flip in retail sentiment like the behavior seen last year. 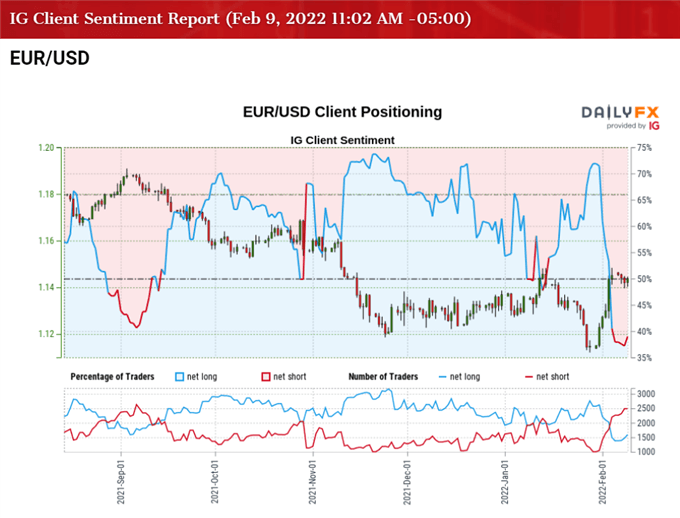 The IG Client Sentiment report shows 40.61% of traders are currently net-long EUR/USD, with the ratio of traders short to long standing at 1.46 to 1.

The number of traders net-long is 9.25% higher than yesterday and 10.37% lower from last week, while the number of traders net-short is 2.38% higher than yesterday and 39.48% higher from last week. The decline in net-long position comes as EUR/USD pulls back from a fresh yearly high (1.1484), while the jump in net-short interest has fueled the flip in retail sentiment as 42.73% of traders were net-long the pair last week.

With that said, EUR/USD may continue to retrace the decline from the November high (1.1616) as it attempts to breakout of the opening range for 2022, but the advance from the January low (1.1121) may turn out to be a correction in the broader trend as the FOMC looks to normalize monetary policy ahead of its European counterpart. 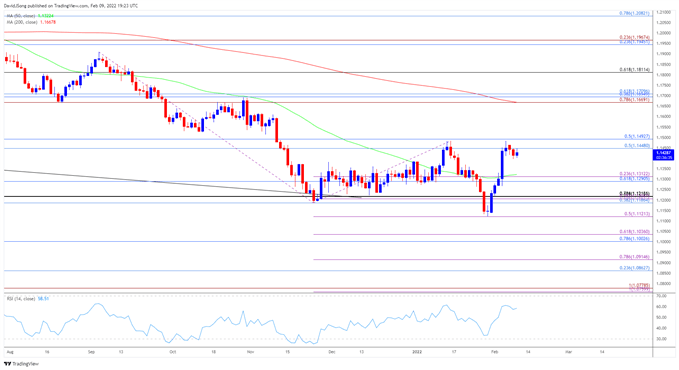