AUD/USD retraces the decline following the better-than-expected US Non-Farm Payrolls (NFP) report as it extends the advance from the start of the week, and the exchange rate may stage a larger recovery over the coming days if it manages to clear the opening range for February.

AUD/USD appears to have reversed ahead of the monthly low (0.7033) as it initiates a fresh series of higher highs and lows, and the exchange rate may continue to retrace the decline from the January high (0.7314) as it appears to be on track to test last week’s high (0.7168).

However, the update to the US Consumer Price Index (CPI) may curb the recent rebound in AUD/USD as the headline reading is expected to increase to 7.3% from 7.0% per annum in December, which would mark the highest reading since 1982, and the advance from the January low (0.6968) may turn out to be a correction in the broader trend as evidence of stronger inflation puts pressure on the Federal Reserve to normalize monetary policy sooner rather than later.

Meanwhile, it seems as though the Reserve Bank of Australia (RBA) will endorse a wait-and-see approach after concluding its quantitative easing (QE) program earlier this month as central bank insists that “while inflation has picked up, it is too early to conclude that it is sustainably within the target band,” and the central bank may merely attempt to buy time at its next meeting on March 1 as Governor Philip Lowe and Co. pledge to “not increase the cash rate until actual inflation is sustainably within the 2 to 3 per cent target range.”

In turn, AUD/USD may exhibit a bearish trend in 2022 amid the diverging paths between the RBA and Fed, but the recent recovery in the exchange rate has helped to alleviate the tilt in retail sentiment like the behavior seen during the previous year. 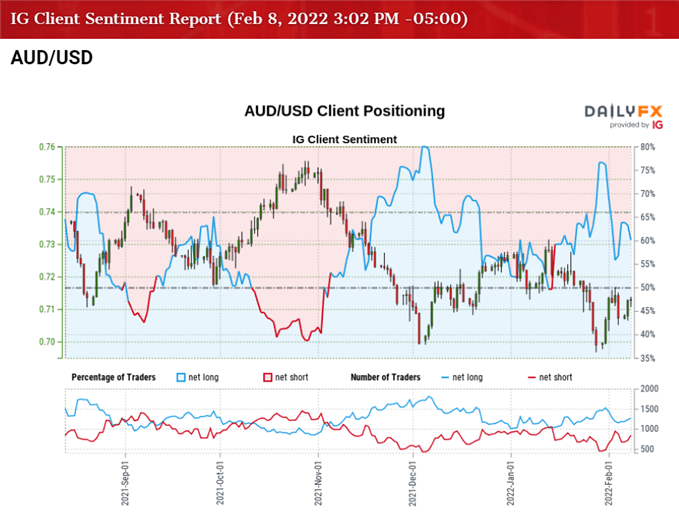 The IG Client Sentiment report shows 55.93% of traders are currently net-long AUD/USD, with the ratio of traders long to short standing at 1.27 to 1.

The number of traders net-long is 5.84% lower than yesterday and 5.27% lower from last week, while the number of traders net-short is 18.26% higher than yesterday and 29.54% higher from last week. The decline in net-long position comes as the US NFP report triggered a bearish reaction in AUD/USD, while the jump in net-short interest has helped to alleviate the tilt in retail sentiment as 70.83% of traders were net-long the pair last week.

With that said, AUD/USD may attempt to break out of the opening range for February after reversing ahead of the monthly low (0.7033), but the update to the US CPI may drag on the exchange rate amid the diverging paths between the RBA and Federal Open Market Committee (FOMC). 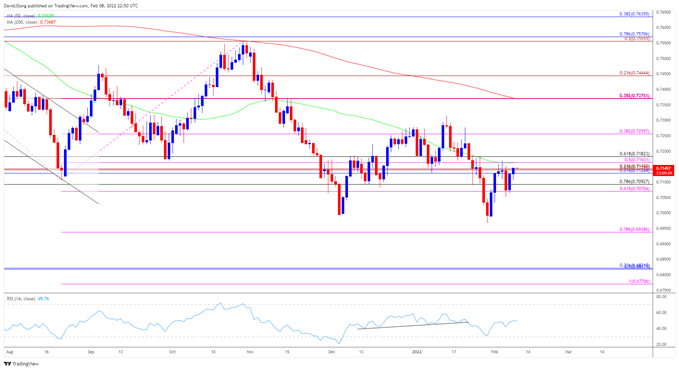