NZD/USD attempts to retrace the decline following the better-than-expected US Non-Farm Payrolls (NFP) on the back of US Dollar weakness, and the exchange rate may stage a larger recovery over the coming days if it manages to clear the opening range for February.

NZD/USD appeared to be on track to test the former support zone around the December low (0.6701) as the Relative Strength Index (RSI) bounced back from oversold territory, but fresh developments coming out of the US may continue to rattle the rebound from the January low (0.6529) as inflation is expected to increase for the fifth consecutive month.

The update to the US Consumer Price Index (CPI) is anticipated to show the headline reading climbing to 7.3% from 7.0% per annum in December, which would mark the highest reading since 1982, and another uptick in the CPI may spur a bullish reaction in the US Dollar as the Federal Reserve plans to normalize monetary policy over the coming months.

Signs of heightening price pressures may push the Federal Open Market Committee (FOMC) to further adjust the forward guidance for monetary policy as the central bank is slated to update the Summary of Economic Projections (SEP) at its next meeting in March, and it remains to be seen if Chairman Jerome Powell and Co. will project a steeper path for the Fed Funds rate as the central bank pledges to “use our tools both to support the economy and a strong labor market and to prevent higher inflation from becoming entrenched.”

Until then, NZD/USD may continue to face headwinds as the back-to-back rate hikes from the Reserve Bank of New Zealand (RBNZ) did little to shore up the exchange rate, and the tilt in retail sentiment looks poised to persist as traders have been net-short the pair since mid-November. 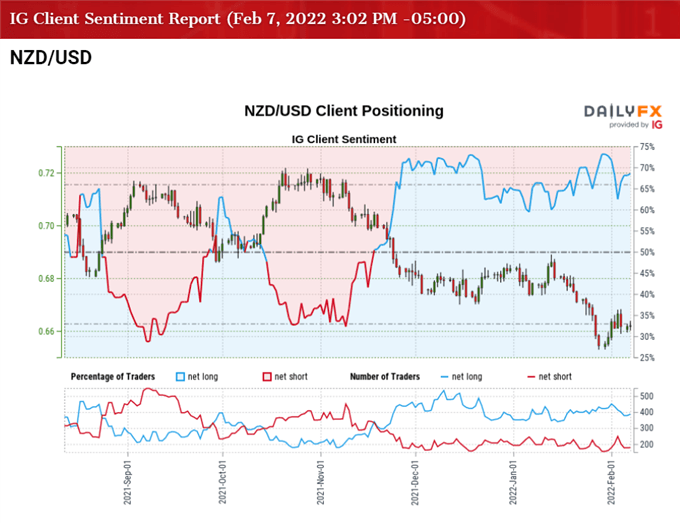 The IG Client Sentiment report shows 61.93% of traders are currently net-long NZD/UDS, with the ratio of traders long to short standing at 1.63 to 1.

The number of traders net-long is 7.14% higher than yesterday and 6.25% lower from last week, while the number of traders net-short is 40.68% higher than yesterday and 37.57% higher from last week. The decline in net-long interest comes as NZD/USD struggled to hold its ground following the US NFP report, while the rise in net-short position has helped to alleviate the tilt in retail sentiment as 65.56% of traders were net-long the pair last week.

With that said, NZD/USD may stage a larger recovery over the coming days if it manages to clear the opening range for February, but the rebound from the January low (0.6529) may turn out to be a correction in the broader trend if the former support zone around the December low (0.6701) acts as resistance. 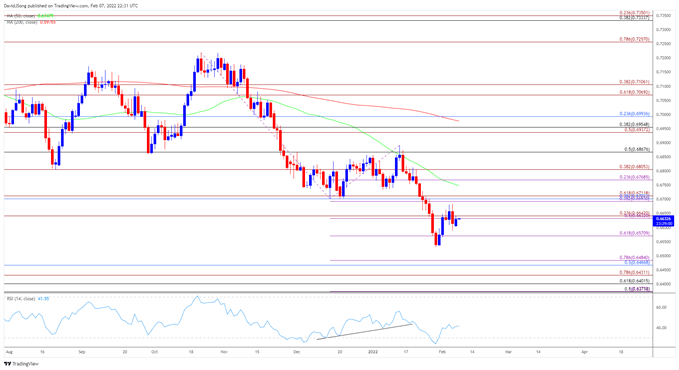