USD/JPY appears to have reversed course ahead of the January high (116.32) as it gives back the advance following the Federal Reserve interest rate decision, and the exchange rate may face a larger pullback ahead of the US Non-Farm Payrolls (NFP) report as it snaps the series of higher highs and lows from the monthly low (113.47).

USD/JPY extends the decline from last week’s high (115.69) despite a near-term recovery in global equity prices, and failure to retain the bullish price series may keep the exchange rate within the January range as a head-and-shoulders formation appears to be taking shape.

It remains to be seen if the recent weakness in USD/JPY will turn out to be a correction in the broader trend as the Federal Open Market Committee (FOMC) lays out a more detailed exit strategy, and a further improvement in the labor market may encourage the central bank to winddown its balance sheet sooner rather than later as the NFP report is anticipated to show the US economy adding 153K jobs in January.

A positive development may prop up USD/JPY as the Fed prepares to normalize monetary policy, but another weaker-than-expected NFP report may produce headwinds for the US Dollar as it casts a weakened outlook for the economy.

Until then USD/JPY may track the January range as it reverses ahead of the monthly high (116.32), but the deviating paths between the FOMC and Bank of Japan (BoJ) may continue to foster the crowding behavior seen in late-2021 as the recent flip in retail sentiment was short lived. 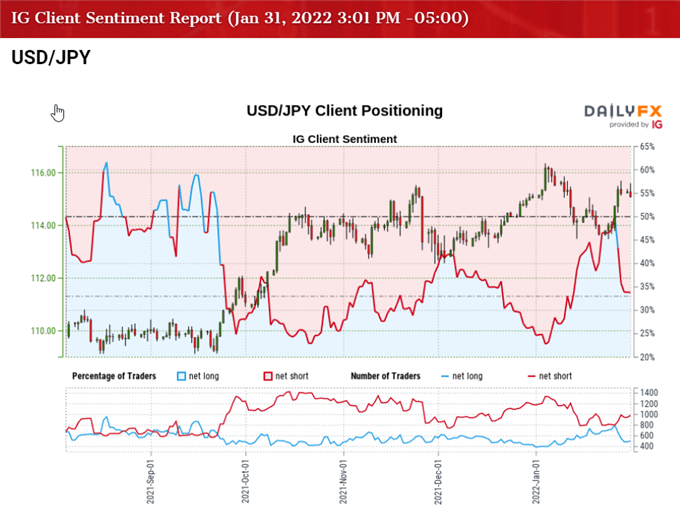 The IG Client Sentiment report shows only 31.39% of traders are net-long USD/JPY, with the ratio of traders short to long currentlystanding at 2.19 to 1.

The number of traders net-long is 3.33% higher than yesterday and 30.73% lower from last week, while the number of traders net-short is 15.32% higher than yesterday and 30.60% higher from last week. The decline in net-long position comes as USD/JPY snaps the series of higher highs and lows from the monthly low (113.47), while the rise in net-short interest has fueled the tilt in retail sentiment as 38.75% of traders were net-long the pair on January 20.

With that said, recent price action raises the scope for a further decline in USD/JPY as a head-and-shoulders formation appears to be taking shape, but the recent weakness in the exchange rate may turn out to be a correction in the broader trend as the Fed lays out a more detailed exit strategy. 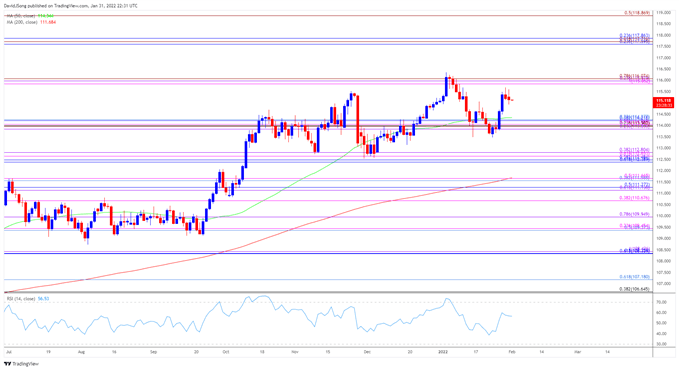