AUD/USD snaps the series of lower highs and lows from last week as it bounces back from a fresh yearly low (0.6968), and the Reserve Bank of Australia (RBA) interest rate decision may fuel the recent rebound in the exchange rate if the central bank adjusts the forward guidance for monetary policy.

AUD/USD halts a three-day selloff, with the decline following the Federal Reserve rate decision failing to push the Relative Strength Index (RSI) into oversold territory, and fresh remarks from the RBA may shore up the Australian Dollar as the central bank is currently on track to “purchase government securities at the rate of $4 billion a week until at least mid February 2022.”

Plans to cease the quantitative easing (QE) program may generate a larger recovery in AUD/USD as the “economy is expected to return to its pre-Delta path in the first half of 2022,” and the RBA may start to discuss an exit strategy in response to the larger-than-expected uptick in Australia’s Consumer Price Index (CPI).

However, the RBA may extend its purchases of government securities as “the Board is committed to maintaining highly supportive monetary conditions to achieve its objectives of a return to full employment in Australia and inflation consistent with the target,” and more of the same from Governor Philip Lowe and Co. may undermine the recent rebound in AUD/USD as the central bank pledges to “not increase the cash rate until actual inflation is sustainably within the 2 to 3 per cent target range.”

In turn, AUD/USD may exhibit a bearish trend in 2022 amid the diverging paths between the RBA and Federal Open Market Committee (FOMC), but a further decline in the exchange rate may fuel the recent flip in retail sentiment like the behavior seen during the previous year. 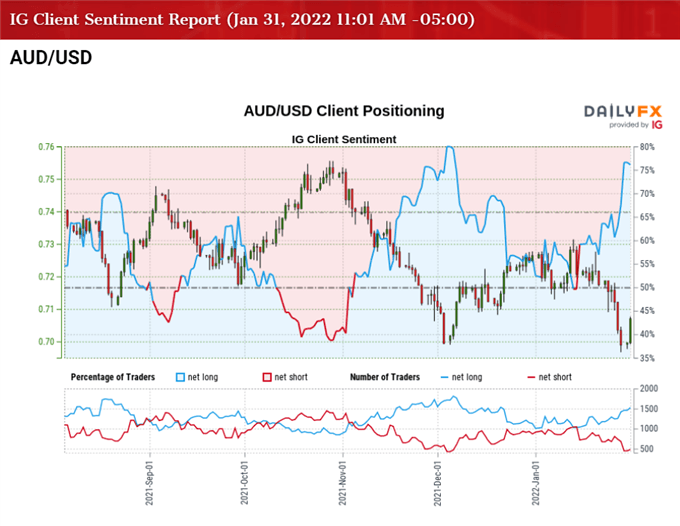 The IG Client Sentiment report shows 70.83% of traders are currently net-long AUD/USD, with the ratio of traders long to short standing at 2.43 to 1.

With that said, recent developments raise the scope for a larger recovery in AUD/USD as there appears to be a divergence between price and the RSI, and the RBA rate decision may generate a bullish reaction in the Australian Dollar if the central bank adjusts the forward guidance for monetary policy. 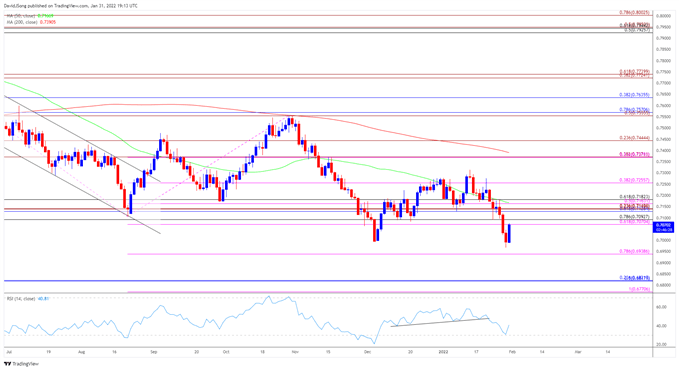