NZD/USD appears to be on track to test the monthly low (0.6733) as it extends the series of lower highs and lows from last week, but the exchange rate may trade within a defined range it if continues to defend the opening range for January.

NZD/USD extends the decline from the monthly high (0.6891) as the US Dollar outperforms against most of its major counterparts, and the exchange rate may face headwinds ahead of the Federal Reserve interest rate on January 26 as the central bank prepares to normalize monetary policy.

It seems as though Fed policy will have a greater impact on NZD/USD as the back-to-back rate hikes from the Reserve Bank of New Zealand (RBNZ) did little to shore up the exchange rate, and the New Zealand Dollar may continue to underperform against its US counterpart as Fed Governor Lael Brainard reveals that “we started to discuss shrinking our balance sheet” while testifying in front of the Senate Committee on Banking, Housing and Urban Affairs.

It remains to be seen if the Federal Open Market Committee (FOMC) will embark on quantitative tightening (QT) in 2022 as the Omicron variant continues to pose a threat to economic activity, but evidence of persistent inflation may push Chairman Jerome Powell and Co. to unveil a more detailed exit strategy as the US Consumer Price Index (CPI) climbs to its highest level since 1982.

In turn, NZD/USD may face continue to exhibit a bearish trend in 2022 as the 50-Day SMA (0.6832) and 200-Day SMA (0.7015) reflect a negative slope, and the tilt in retail sentiment looks poised to persist as traders have been net-long the pair since mid-November. 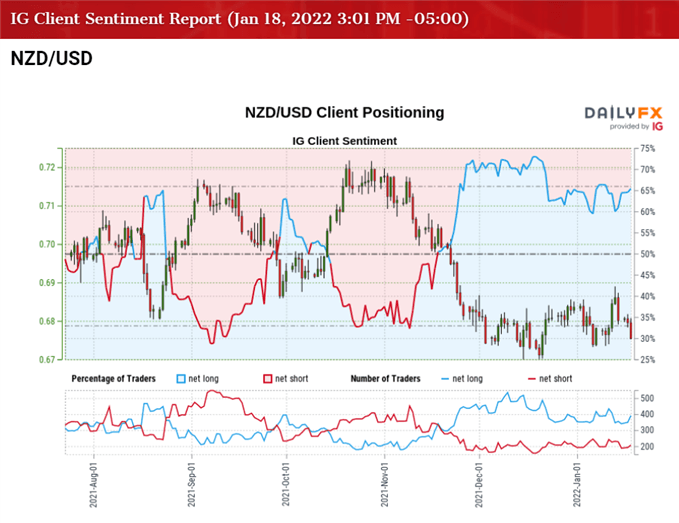 The IG Client Sentiment report shows 65.05% of traders are currently net-long NZD/USD, with the ratio of traders long to short standing at 1.86 to 1.

With that said, NZD/USD may attempt to test the monthly low (0.6733) as the bearish price series persists, but the exchange rate may trade within a defined range ahead of the Fed rate decision it if continues to defend the opening range for January.