USD/JPY trades to a fresh monthly low (114.38) despite another uptick in the US Consumer Price Index (CPI), and the exchange rate may continue to give back the advance from the November low (112.53) as it fails to defend the opening range for January.

USD/JPY continues to fall back from a five-year high following the textbook sell signal in the Relative Strength Index (RSI), and the exchange rate appears to be tracking the recent weakness in longer-dated Treasury yields even as Federal Reserve Chairman Jerome Powell strikes a hawkish tone in front of US lawmakers.

As a result, USD/JPY may face a further decline over the remainder of the week as the surge in the Omicron variant puts pressure on the Federal Open Market Committee (FOMC) to delay normalizing monetary, and it remains to be seen if the central bank will respond to the rising number of COVID-19 cases as Fed officials show a greater willingness to reveres the emergency measures taken in response to the pandemic.

While speaking at The Wall Street Journal CFO Network Summit,Cleveland Fed President Loretta Mester, who votes on the FOMC this year, argues that the committee “could go faster than we did last time” in regards to unloading the central bank’s balance sheet. It seems as though the Fed will unveil a more detailed exit strategy as the central bank prepares to implement higher interest rates, and the recent weakness in USD/JPY may turn out to be a correction in the broader trend amid the diverging paths between the FOMC and Bank of Japan (BoJ).

In turn, USD/JPY may exhibit a bullish trend in 2022 as the FOMC shifts gears, and the tilt in retail sentiment looks poised to persist as traders have been net-short the pair since late-September. 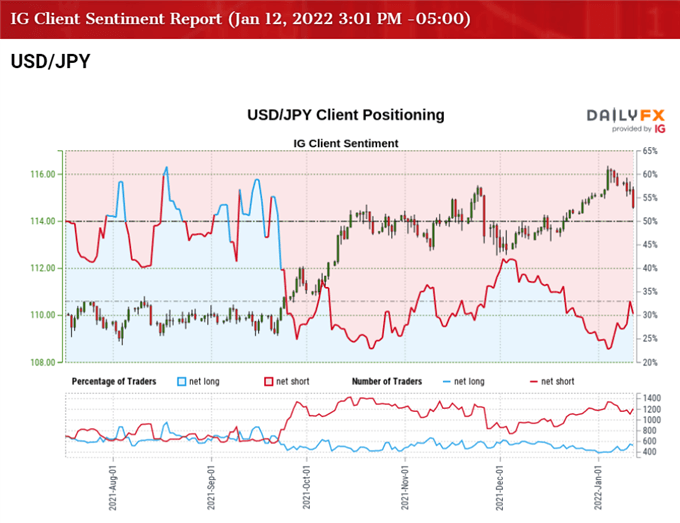 The IG Client Sentiment report shows 31.29% of traders are currently net-long USD/JPY, with the ratio of traders short to long standing at 2.20 to 1.

The number of traders net-long is 10.87% lower than yesterday and 2.76% higher from last week, while the number of traders net-short is 10.37% lower than yesterday and 15.03% lower from last week. The rise in net-long interest has helped to alleviate the tilt in retail sentiment as only 27.73% of traders were net-long USD/JPY last week, while the decline in net-short position could be a function of profit-taking behavior as the exchange rate trades to a fresh monthly low (114.38).

With that said, the decline from the monthly high (116.35) may turn out to be a correction in the broader trend as USD/JPY pulls back from a five-year high, but failure to defend the opening range for January may push the exchange rate towards the November low (112.53) as the bullish momentum unravels.