NZD/USD Rate Defends January Opening Range Ahead of US CPI

NZD/USD trades to a fresh weekly high (0.6791) even as Federal Reserve Chairman Jerome Powell strikes a hawkish tone in front of US lawmakers, and the exchange rate may stage a larger rebound over the coming days as it defends the opening range for January.

NZD/USD Rate Defends January Opening Range Ahead of US CPI

NZD/USD extends the advance following the weaker-than-expected US Non-Farm Payrolls (NFP) report on the back of US Dollar weakness, and the exchange rate may continue to retrace the decline from the monthly high (0.6857) as it tracks the December range.

It remains to be seen if the update to the US Consumer Price Index (CPI) will influence NZD/USD as the headline reading is expected to increase to 7.0% from 6.8% per annum in November, which would mark the highest reading since 1982, and another pickup in the index may spark a bullish reaction in the US Dollar as it puts pressure on the Federal Reserve to normalize monetary policy sooner rather than later.

Signs of strong inflation may push the FOMC to implement higher interest rates over the coming months amid the ongoing improvement in the labor market, and speculation for an imminent change in regime may drag on NZD/USD as the exchange rate trades at its lowest level since November 2020 despite the back-to-back rate hikes from the Reserve Bank of New Zealand (RBNZ).

In turn, NZD/USD may continue to depreciate in 2022 as both the 50-Day SMA (0.6862) and 200-Day SMA (0.7021) reflect a negative slope, and the tilt in retail sentiment looks poised to persist as traders have been net-long the pair since mid-November. 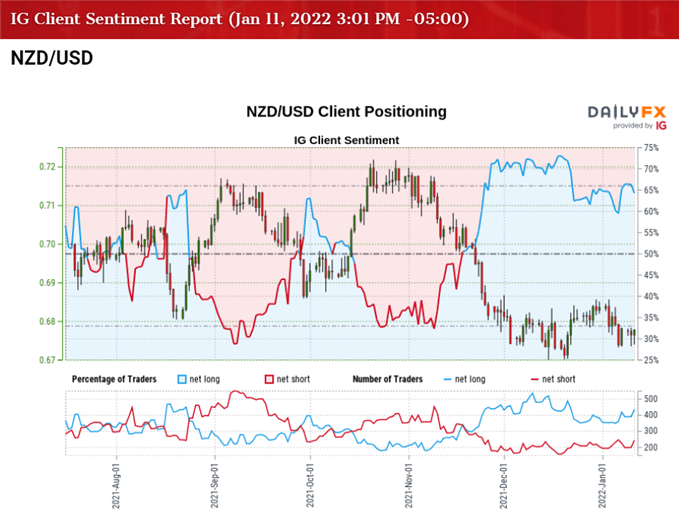 The IG Client Sentiment report shows 63.53% of traders are currently net-long NZD/USD, with the ratio of traders long to short standing at 1.74 to 1.

With that said, another uptick in the US CPI may undermine the recent rebound in NZD/USD as it fuels bets for an imminent Fed rate hike, but the exchange rate may stage a larger rebound over the coming days as it defends the opening range for January.