AUD/USD Weakness to Persist on Failure to Defend Monthly Range

AUD/USD gives back the advance following the lackluster US Non-Farm Payrolls (NFP) report as the total number of COVID-19 cases in Australia climbs above 1 million, and the reversal from the December high (0.7278) may gather pace if the exchange rate fails to defend the opening range for January.

AUD/USD Weakness to Persist on Failure to Defend Monthly Range

AUD/USD approaches the monthly low (0.7130) even as Australia Prime Minster Scott Morrison looks to avoid another lockdown as the Omicron variant is likely to put pressure on the Reserve Bank of Australia (RBA) to further support the economy.

PM Morrison argues that “Omicron is a gear change and we have to push through” while speaking in Canberra, and it remains to be seen if the RBA will relay a similar message as the central bank is currently on track to “purchase government securities at the rate of $4 billion a week until at least mid-February 2022.”

The uncertainty posed by the Omicron variant may keep AUD/USD within the December range as the RBA remains “committed to maintaining highly supportive monetary conditions to achieve its objectives of a return to full employment in Australia and inflation consistent with the target,” but the Australia Dollar may face headwinds ahead of the next interest rate decision on February 1 as Governor Philip Lowe and Co. pledge to “not increase the cash rate until actual inflation is sustainably within the 2 to 3 per cent target range.”

Until then, AUD/USD may trade within a defined range even though the Federal Reserve appears to be on track to implement higher US interest rates over the coming months, but the tilt in retail sentiment looks poised to persist as retail traders have been net-long the pair since November. 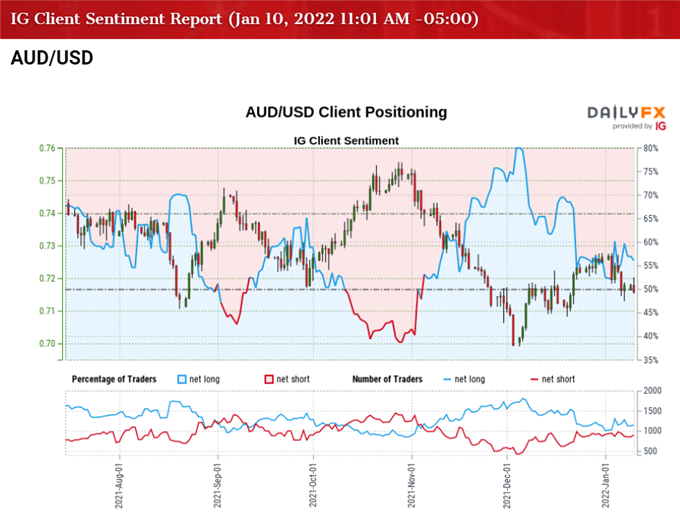 The IG Client Sentiment report shows 53.38% of traders are currently net-long AUD/USD, with the ratio of traders long to short standing at 1.14 to 1.

With that said, AUD/USD may face a further decline over the coming days if it fails to defend the opening range for January, and the exchange rate may exhibit a bearish trend in 2022 amid the diverging paths between the RBA and Federal Open Market Committee (FOMC).