EUR/USD struggles to hold its ground following the kneejerk reaction to the weaker-than-expected US Non-Farm Payrolls (NFP) report, and the exchange rate may continue to give back the rebound from the November low (1.1186) as a growing number of Federal Reserve officials show a greater willingness to normalize monetary policy.

EUR/USD may continue to exhibit a bearish trend over the remainder of the year amid the diverging paths between the European Central Bank (ECB) and Federal Open Market Committee (FOMC), and it seems as though the US central bank is on track to deliver a rate hike in 2022 as Chairman Jerome Powellstrikes a hawkish tone in front of US lawmakers.

At the same time, St. Louis Fed President James Bullard, who votes on the FOMC next year, acknowledged that “real GDP has already passed the pre-pandemic peak” while speaking at the Missouri Bankers Association, with the official going onto say that the central bank “may want to consider removing accommodation at a faster pace” amid the ongoing improvement in the labor market.

As a result, Chairman Powell and Co. may forecast a steeper path for the Fed funds rate as the central bank is slated to update the Summary of Economic Projections (SEP), and the US Dollar may continue to outperform against its European counterpart ahead of the next Fed interest rate decision on December 15 as the ECB remains in no rush to winddown its emergency measures.

In turn, the bearish trend in EUR/USD may carry into 2022 as a growing number of Fed officials show a greater willingness to normalize monetary policy sooner rather than later, but a further decline in the exchange rate may fuel the tilt in retail sentiment like the behavior seen earlier this year. 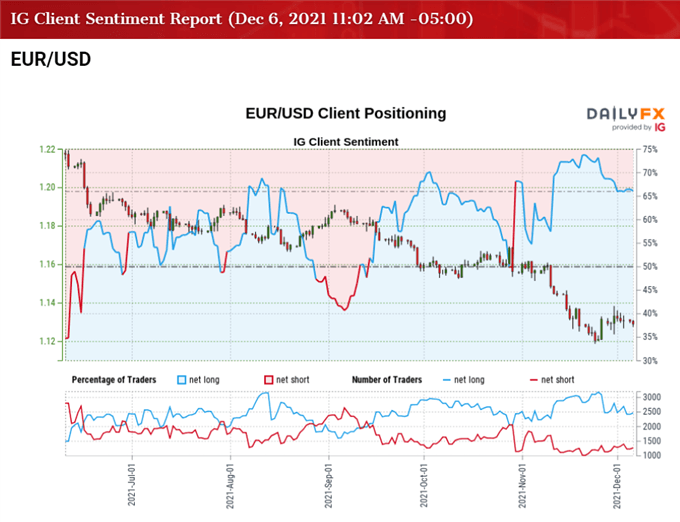 The IG Client Sentiment report shows 64.07% of traders are currently net-long EUR/USD, with the ratio of traders long to short standing at 1.78 to 1.

The number of traders net-long is 8.09% higher than yesterday and 7.69% lower from last week, while the number of traders net-short is 19.77% higher than yesterday and 11.88% higher from last week. The decline in net-long position has done little to alleviate the crowding behavior as 64.88% of traders were net-long EUR/USD last week, while the rise in net-short position comes as EUR/USD struggles to retain the rebound from the November low (1.1186).

With that said, the diverging paths between the ECB and FOMC may continue to foster a bearish trend in EUR/USD, and the exchange rate may trade to fresh yearly lows throughout the remainder of 2021 as market participants prepare for higher interest rates in the US.