NZD/USD trades to a fresh weekly low (0.6998) following the better-than-expected US Retail Sales report, and the exchange rate may continue to give back the advance from the October low (0.6877) as it trades back below the 50-Day SMA (0.7055), with the moving average starting to reflect a negative slope.

NZD/USD remains under pressure after failing to defend the opening range for November, and the exchange rate may continue to depreciate over the remainder of the week as fresh data prints coming out of the US puts pressure on the Federal Reserve to deliver a rate hike sooner rather than later.

US Retail Sales expanded for the third consecutive month in October, with household spending increasing 1.7% versus forecasts for a 1.4% print, and the pickup in private sector consumption may encourage the Federal Open Market Committee (FOMC) to adjust the forward guidance for monetary policy as the central bank is slated to update the Summary of Economic Projections (SEP) at its last meeting for 2021.

It remains to be seen if the Fed officials will project a steeper path for the Fed funds rate as the US Consumer Price Index (CPI) climbs to its highest level since 1990, but signs of sticky inflation along with indications of a robust recovery may keep NZD/USD under pressure as market participants prepare for a imminent shift in regime.

In turn, NZD/USD may continue to give back the advance from the October low (0.6877) after failing to defend the opening range for November, but the tilt in retail sentiment may persist if the exchange rate struggles to clear the monthly low (0.6997). 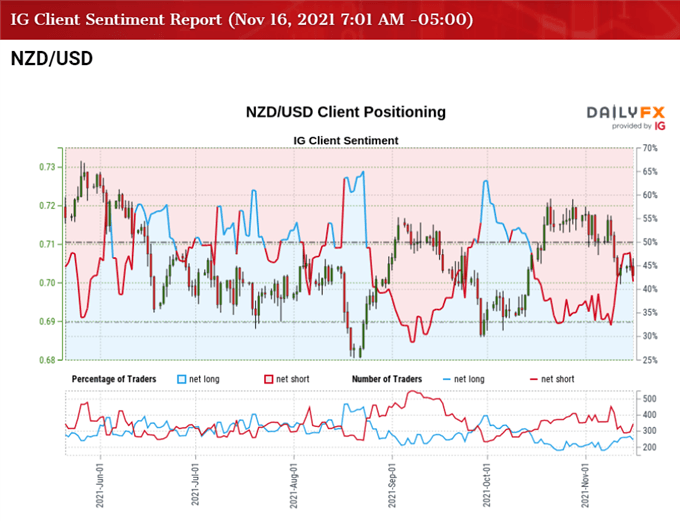 The IG Client Sentiment report shows 40.82% of traders are currently net-long NZD/USD, with the ratio of traders short to long standing at 1.45 to 1.

The number of traders net-long is 5.76% lower than yesterday and 10.32% higher from last week, while the number of traders net-short is 35.23% higher than yesterday and 11.43% lower from last week. The rise in net-long interest has done little to alleviate the crowding behavior as 43.05% of traders were net-long NZD/USD last week, while the decline in net-short position could be a function of profit-taking behavior as the exchange rate trades to a fresh weekly low (0.6998).

With that said, NZD/USD continue to give back the advance from the October low (0.6877) after failing to defend the opening range for November, and the move below the 50-Day SMA (0.7055) may indicate a potential change in the near-term trend as the moving average starts to reflect a negative slope.