The price of oil managed to fill the price gap from last week as it climbed to a fresh monthly high ($84.97), but failure to test the October high ($85.41) may generate a larger pullback in crude as it struggles to retain the advance from the November low ($78.25).

The price of oil slips to a fresh weekly low ($80.20) despite a smaller-than-expected rise in US inventories, and crude may face a further decline over the remainder of the week as it starts to carve a series of lower highs and lows.

Nevertheless, the recent weakness in the price of oil may turn out to be a correction in the broader trend as US stockpiles increase 1.001M in the week ending November 5 versus forecasts for a 2.125M print, and expectations for strong demand may keep the Organization of Petroleum Exporting Countries (OPEC) and its allies on their current course as the most recent Monthly Oil Market Report (MOMR) points out that “for 2022, growth in global oil demand remains unchanged compared to the previous month’s assessment, to stand at 4.2 mb/d.” 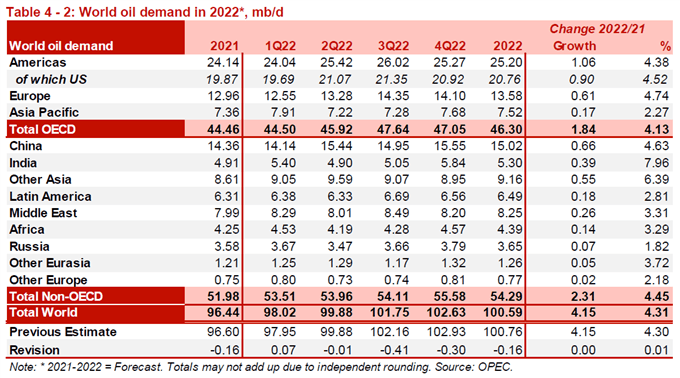 As a result, the MOMR goes onto say that “world total demand in 2022 is now estimated to reach 100.6 mb/d, around 0.5 mb/d above 2019 levels,” and it seems as though OPEC+ will retain a gradual approach in restoring production to pre-pandemic levels as the group plans to “adjust upward the monthly overall production by 0.4 mb/d for the month of December 2021.”

Looking ahead, it remains to be seen if OPEC and its allies will adjust the production schedule at the next Ministerial Meeting on December 2 as the group pledges to “ensure a stable and a balanced oil market,” but current market conditions may keep oil prices afloat amid the tepid recovery in US production.

A deeper look at the recent figures from the US Energy Information Administration (EIA) showed weekly field production holding steady at 11,500K for the second week, and the price of oil may continue to reflect a bullish trend over the coming months as OPEC and its allies appear to be on track to carry the current production schedule into 2022.

With that said, the recent weakness in the price of oil may turn out to be a correction in the broader trend as indications of limited supply are met with expectations for robust demand, but crude may face a larger pullback ahead of the next OPEC+ meeting as it appears to be reversing course following the failed attempt to test the October high ($85.41).