EUR/USD continues to bounce back from a fresh yearly low (1.1513) after quickly retracing the decline following the US Non-Farm Payrolls (NFP) report, and the exchange rate may stage a larger recovery over the coming days if it clears the opening range for November.

EUR/USD appears to be on track to test the monthly high (1.1616) on the back of US Dollar weakness, and the exchange rate may push towards levels seen prior to the European Central Bank (ECB) interest rate decision even as the Governing Council braces for a transitory rise in inflation.

In a recent speech, ECB Executive Board member Philip Lane argues that “the analysis indicating that the euro area is still confronted with weak medium-term inflation dynamics remains compelling,” and it seems as though the central bank is in no rush to switch gears as “extensive monetary accommodation is required to ensure that inflation pressure builds up on a persistent basis in order to stabilise inflation at two per cent over the medium term.”

Lane goes onto say that “an abrupt tightening of monetary policy today would not lower the currently-high inflation rates but would serve to slow down the economy and reduce employment over the next couple of years and thereby reduce medium-term inflation pressure,” and it seems as though the ECB will continue to tame speculation for higher interest rates as “it would be counter-productive to tighten monetary policy at the current juncture.”

Looking ahead, it remains to be seen if President Christine Lagarde and Co. will scale back its emergency measures at its next meeting on December 16 as the Governing Council plans to carry out “a moderately lower pace of net asset purchases under the pandemic emergency purchase programme (PEPP) than in the second and third quarters of this year,” and the deviating paths between the ECB and Federal Reserve may continue to push EUR/USD to fresh 2021 lows throughout the remainder of the year as Chairman Jerome Powell and Co. start to scale back monetary support.

Nevertheless, EUR/USD may stage a larger recovery over the coming days if it manages to clear the opening range for November, but a further decline in the exchange rate may fuel the recent flip in retail sentiment like the behavior seen earlier this year. 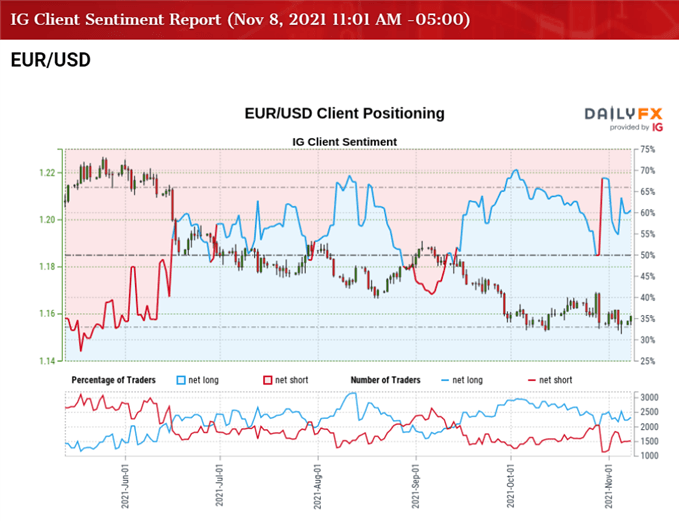 The IG Client Sentiment report shows 61.09% of traders are currently net-long EUR/USD, with the ratio of traders long to short standing at 1.57 to 1.

The number of traders net-long is 13.66% higher than yesterday and 2.43% lower from last week, while the number of traders net-short is 7.76% higher than yesterday and 12.11% higher from last week. The decline in net-long position comes as EUR/USD continues to bounce back from a fresh yearly low (1.1513), while the rise in net-short interest has done little to alleviate the crowding behavior as 54.29% of traders were net-long the pair during the final days of October.

With that said, the recent flip in retail sentiment may persist if EUR/USD clears the opening range for November, but the exchange rate may continue to trade to fresh 2021 lows throughout the remainder of the year amid the deviating paths between the ECB and Federal Open Market Committee (FOMC).