NZD/USD struggles to retain the advance from the start of the week following an unexpected improvement in US household sentiment, with the Relative Strength Index (RSI) indicating a larger pullback in the exchange rate as it falls back from overbought territory to offer a textbook sell signal.

NZD/USD looks poised to test the monthly high (0.7219) as it carves a fresh series of higher highs and lows, but the update to the Conference Board’s Consumer Confidence survey appears to be dragging on the exchange rate as the index climbs to 113.8 from 109.8 in October versus forecasts for a 108.3 print.

Looking ahead, it remains to be seen if the data prints on tap for later this week will generate a similar reaction as Durable Goods Orders are projected to contract 1.1% in September, while the advance US Gross Domestic Product (GDP) report is anticipated to show the economy growing 2.7% in third quarter of 2021 after expanding 6.7% per annum during the previous period.

A batch of mixed developments may produce headwinds for the US Dollar as it puts pressure on the Federal Reserve to delay its exit strategy, and NZD/USD may stage a larger advance ahead of the Federal Open Market Committee (FOMC) interest rate decision on November 3 if the data prints dampen speculation for an imminent shift in monetary policy.

In turn, a test of the monthly high (0.7219) remains in reach as NZD/USD carves a fresh series of higher highs and lows, but a further advance in the exchange rate may fuel the tilt in retail sentiment like the behavior seen during the previous month. 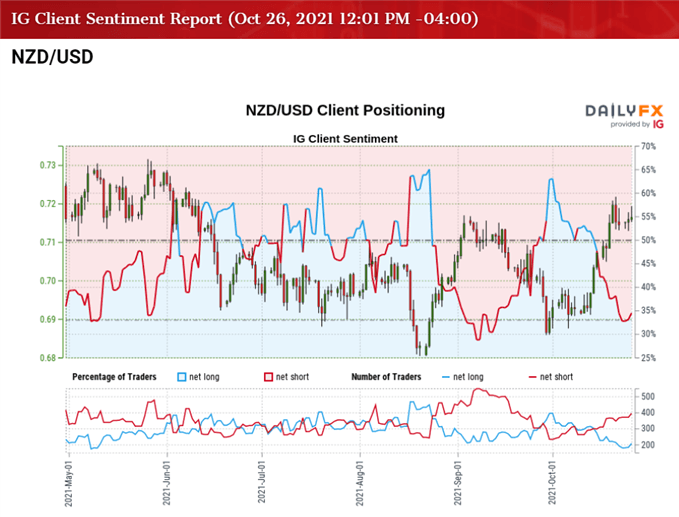 The IG Client Sentiment report shows only 38.73% of traders are currently net-long NZD/USD, with the ratio of traders short to long standing at 1.58 to 1.

With that said, NZD/USD may stay afloat ahead of the next Fed rate decision as fresh data prints coming out of the US are anticipated to show a less robust recovery, but recent developments in the Relative Strength Index (RSI) raises the scope for a larger pullback in the exchange rate as the oscillator falls back from overbought territory to offer a textbook sell signal.