EUR/USD consolidate after trading to a fresh monthly high (1.1669) during the previous week, but the European Central Bank (ECB) interest rate decision may sway the near-term outlook for the exchange rate if the Governing Council adjusts the forward guidance for monetary policy.

EUR/USD appears to be under pressure as the ECB is expected to retain the current course for monetary policy, and more of the same from the Governing Council may drag on the exchange rate as the central bank relies on its non-standard tools to support the Euro Area.

Keep in mind, the account of the ECB’s September meeting suggests the central bank is on a preset course as the Governing Council argues that “near-term increase in inflation was largely driven by temporary factors that would fade in the medium term and not call for policy tightening,” and it seems as President Christine Lagarde and Co. will stick to the sidelines as a further reduction in the pace of purchases under the pandemic emergency purchase programme (PEPP)“might induce market perceptions of a tighter than expected monetary policy, which could result in a tightening of financing conditions.”

As a result, the Euro may face headwinds if the ECB may stick to the same script ahead of its last 2021 interest rate decision in December, but a material adjust in the forward guidance for monetary policy may fuel the recent rebound in EUR/USD as the “Governing Council judged that favourable financing conditions could be maintained with a moderately lower pace of net asset purchases under the PEPP than in the previous two quarters.”

In turn, hints of an ECB exit strategy may generate a bullish reaction in the Euro as “members assessed the risks to the economic outlook as broadly balanced,” but a further recovery in EUR/USD may continue to alleviate the tilt in retail sentiment like the behavior seen earlier this year. 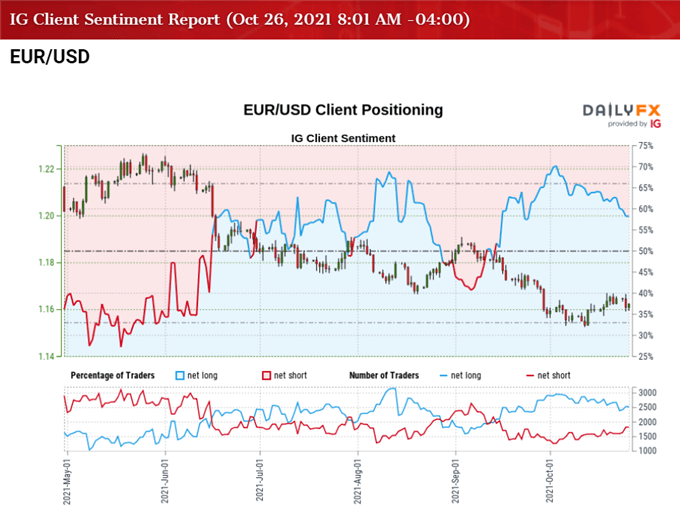 The IG Client Sentiment report shows 57.75% of traders are currently net-long EUR/USD, with the ratio of traders long to short standing at 1.37 to 1.

With that said, the rebound from the monthly low (1.1525) may turn out to be a correction in the broader trend as EUR/USD trades to fresh yearly lows in the second half of 2021,but the ECB rate decision may sway the near-term outlook for the exchange rate if the Governing Council unexpectedly adjusts the forward guidance for monetary policy.