USD/CAD appears to be stuck in a narrow range after retracing the decline following the larger-than-expected uptick in Canada’s Consumer Price Index (CPI), but the Bank of Canada (BoC) interest rate decision may influence the exchange rate if the central bank alters the course for monetary policy.

USD/CAD is little changed ahead of the BoC meeting on October 27 as the central bank is widely expected to keep the benchmark interest rate at the record low of 0.25%, and it remains to be seen if the update to the quarterly Monetary Policy Report (MPR) will reveal a shift in the forward guidance as the central bank remains “committed to holding the policy interest rate at the effective lower bound until economic slack is absorbed so that the 2 percent inflation target is sustainably achieved.”

As a result, more of the same from the BoC may produce a bearish reaction in the Canadian Dollar as “the Governing Council judges that the Canadian economy still has considerable excess capacity,” but Governor Tiff Macklem and Co. may continue to winddown its quantitative easing (QE) program after reducing the target pace to C$ 2B per week in July as the most recent Employment report shows the labor market returning to pre-pandemic conditions.

In turn, USD/CAD may struggle to retain the rebound from the monthly low (1.2288) if the BoC further reduces the QE program and shows a greater willingness to alter the course for monetary policy, but a larger rebound in the exchange rate may continue to alleviate the tilt in retail sentiment like the behavior seen earlier this year. 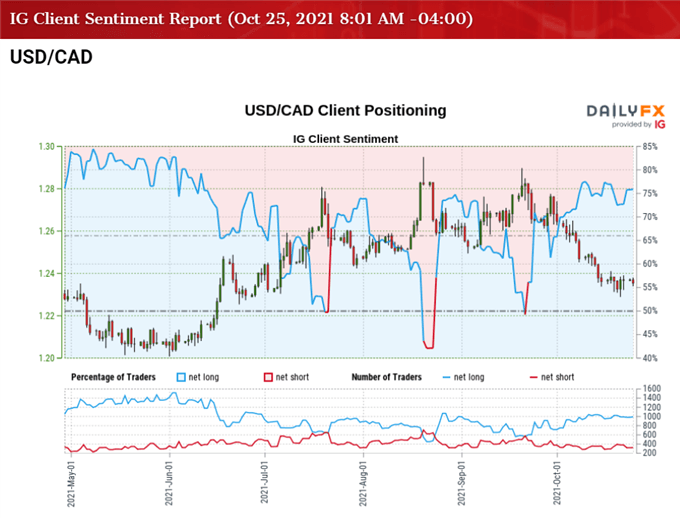 The IG Client Sentiment report shows 75.81% of traders are currently net-long USD/CAD, with the ratio of traders long to short standing at 3.13 to 1.

With that said, fresh developments coming out of the BoC may keep USD/CAD under pressure if the central bank scales back its QE program and adjusts the forward guidance for monetary policy, but more of the same from Governor Macklem and Co. may fuel the rebound from the monthly low (1.2288) as the Federal Reserve prepares to switch gears later this year.