AUD/USD appears to be outperforming its major counterparts going into the end of October as it attempts to retrace the pullback from the monthly high (0.7547), and the update to Australia’s Consumer Price Index (CPI) may do little to derail the rebound in the exchange rate as the report is anticipated to reinforce expectations for a transitory rise in inflation.

It remains to be seen if fresh data prints coming out of Australia will influence the near-term outlook for AUD/USD amid the limited reaction to the weaker-than-expected Australia Employment report, and the CPI figures may keep the Reserve Bank of Australia (RBA) on track to retain the current course for monetary policy as the headline reading is expected to narrow to 3.1% from 3.8% per annum in the second quarter of 2021.

Evidence of easing price growth may encourage Governor Philip Lowe and Co. to overlook the recent developments as “the Delta outbreak has interrupted the recovery of the Australian economy,” and current market conditions may keep AUD/USD afloat ahead of the next RBA meeting on November 2 as “setback to the economic expansion in Australia is expected to be only temporary.”

In turn, AUD/USD may attempt to trade above the 200-Day SMA (0.7560) for the first time since July as the minutes from the September meeting suggest the RBA is becoming concerned about level of monetary support, but a larger pullback in the exchange rate may continue to alleviate the tilt in retail sentiment like the behavior seen during the previous month. 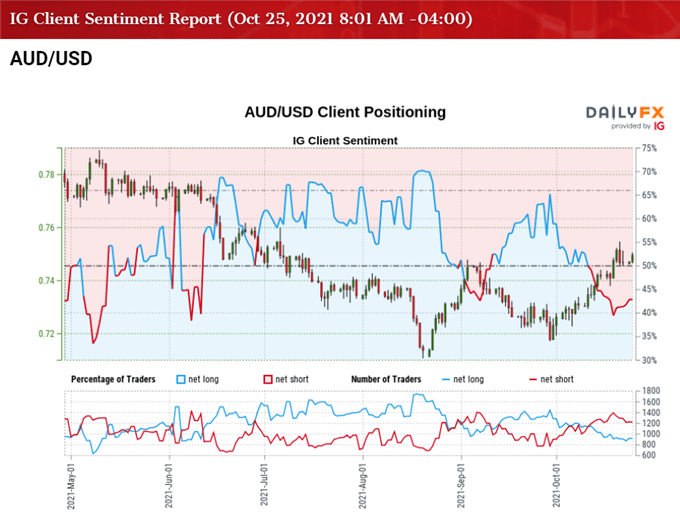 The IG Client Sentiment report shows 42.81% of traders are currently net-long AUD/USD, with the ratio of traders short to long standing at 1.34 to 1.

With that said, fresh data prints coming out of Australia may do little to derail the correction in AUD/USD as the Relative Strength Index (RSI) marks the first overbought reading since February, and another move above 70 in the oscillator may indicate a further advance in the exchange rate like the price action seen during the previous week.