AUD/USD Rate to Face Another Decline in Australia Employment

AUD/USD extends the advance from the start of the week to trade to a fresh monthly high (0.7385), but the update to Australia’s Employment report may drag on the exchange rate as job growth is expected to contract for the second consecutive month.

AUD/USD Rate to Face Another Decline in Australia Employment

AUD/USD trades back above the 50-Day SMA (0.7303) despite the kneejerk reaction to the US Non-Farm Payrolls (NFP) report, and the exchange rate may continue to retrace the decline from the September high (0.7478) as it extends the series of higher highs and lows from last week.

However, fresh data prints coming out of Australia may drag on AUD/USD as employment is expected to fall 137.5K job September after contracting 146.3K the month prior, and the recent weakness in the labor market may keep the Reserve Bank of Australia (RBA) on the sidelines as the central bank acknowledges that “the Delta outbreak has interrupted the recovery of the Australian economy and GDP is expected to have declined materially in the September quarter.”

As a result, Governor Philip Lowe and Co. appear to be on track to retain the current course for monetary policy as “the outbreak of the Delta variant had delayed, but not derailed, the recovery,” and the Australian Dollar may face headwinds ahead of the next RBA meeting on November 2 as the central bank relies on its non-standard measures to support the economy.

In turn, the deviating paths between the RBA and Federal Reserve may keep a lid on AUD/USD as Chairman Jerome Powell and Co. unveil a tentative exit strategy, but a further advance in the exchange rate may fuel the recent flip in retail sentiment like the behavior seen earlier this year. 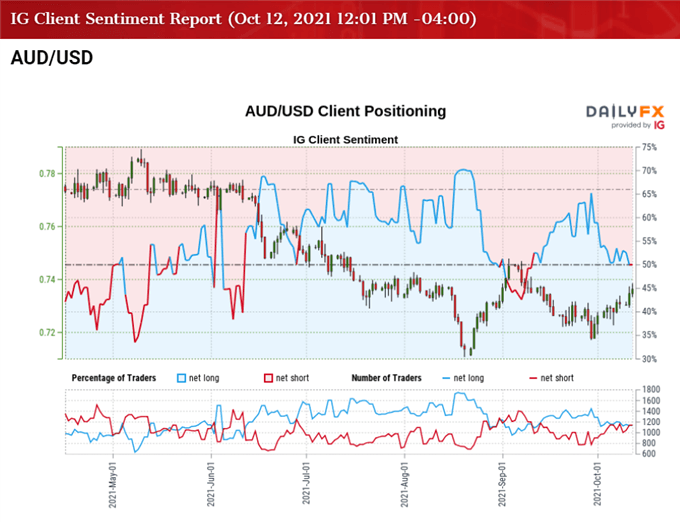 The IG Client Sentiment shows 47.99% of traders are currently net-long AUD/USD, with the ratio of traders short to long standing at 1.08 to 1.

The number of traders net-long is 2.18% lower than yesterday and 9.08% lower from last week, while the number of traders net-short is 8.29% higher than yesterday and 12.29% higher from last week. The decline in net-long interest could be a function of profit taking behavior as AUD/USD trades to a fresh monthly high (0.7385), while the rise in net-short position has helped to fuel the flip in retail sentiment as 52.92% of traders were net-long the pair last week.

With that said, AUD/USD may stage a larger advance ahead of Australia’s Employment report as it extends the series of higher highs and lows carried over from last week, but the ongoing disruptions caused by COVID-19 may continue to drag on the Australian Dollar as the RBA seems to be on a preset course for the remainder of the year.